Leaders with a Vision, Who Knew How to Use It 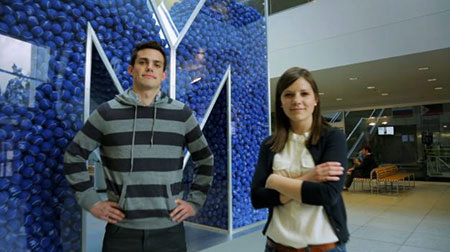 Erika Nash and Brandon Beck were BYU student body leaders who had a vision and knew how to accomplish it. “Our defining initiative,” Erika said, “was to connect students with opportunities to serve in ways that matched their skills and interests.”

“Getting students involved is important anywhere,” Brandon added, “but it’s monumentally important at BYU, where we have a unique mission to serve after graduation and make a difference in the world.”

Brandon and Erika graduated as business management majors. During their time at BYU, they were elected president and vice president respectively in 2014 with the ambition to unite the student community in meaningful activities that would both enhance their experience as students and prepare them for a life of service.

“I attended a football game one time where students were spread out and had no sense of unity or community,” Brandon said. “We worked with the athletic department to create a setting where students could feel a part of the university.”

To emphasize the point, a decorative rock placed at an entrance to LaVell Edwards Stadium now reminds students of leadership principles with the acronym “ROC,” or, “roar of cougars.”

The two leaders hope that this initiative and others improves the campus experience with a stronger sense of oneness and giving, which had been their goal since they first considered running for student body leadership.

Brandon describes Erika as “tenacious.” It was this effervescent brunette from Holladay, Utah, who started their campaign rolling. “I asked Brandon one day if he ever thought of running for student body president?” she said.

“I responded by saying I had, and was thinking of her as my running mate,” Brandon said.

“We are both beneficiaries of scholarships,” Erika said. “We were able to help others because of someone’s generosity. As recipients, it’s important that we look for ways to give back. It’s been an amazing experience. BYU is a special place where meaningful relationships are developed that build and lift.”