From My Perspective: This Is a Student 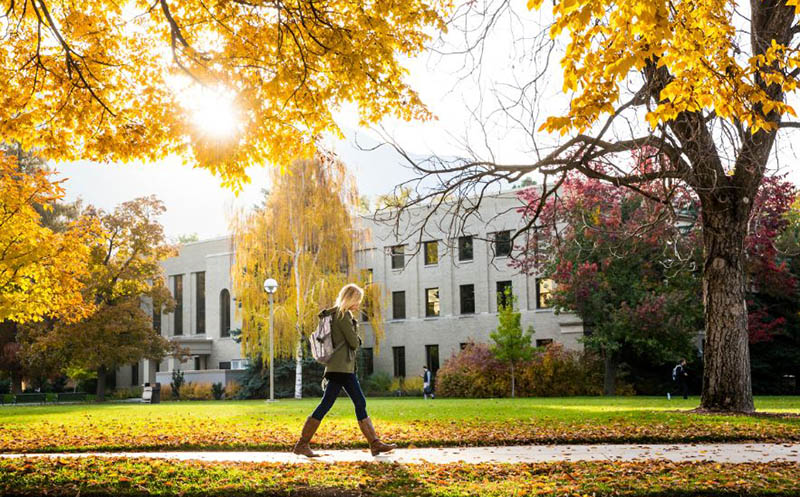 Notwithstanding the ever-present challenges of the times in which we live, for Brigham Young University, the past 12 months have been filled with great accomplishments. Our students continue to shine, both in academic pursuits and in extracurricular activities.

Our students continue to shine, both in academic pursuits and in extracurricular activities.

And in a combined effort of BYU Grounds and the landscape management program, a student team from BYU won its fourth-consecutive National Collegiate Landscape Competition, with BYU students earning 18 of the 75 scholarships awarded.

In short, BYU students are excelling in the classroom, on the field, and even in preparing the field.

Our mission statement remains our fundamental university constitution. We are indeed committed to “[assisting] individuals in their quest for perfection and eternal life.”1 I hope all who visit campus or interact with us sense our collective and individual commitment to our lofty mission. It is one of BYU’s distinctive features.

Students are why we exist. At the end of the day, we are striving to develop disciples of Jesus Christ. How they develop—what they do, and, more important, who they are—is the ultimate metric by which our work will be measured.

I am reminded of a story told about legendary football coach Vince Lombardi. In 1960, his Green Bay Packers lost the NFL championship game to the Philadelphia Eagles, 17–13. The final drive by the Packers ended just short of the goal line. After such a loss, how did Coach Lombardi inspire his team? He began the first team meeting in 1961 with a simple but powerful statement: “Gentlemen,” he said, holding a pigskin, “this is a football.”2

The lesson: we must not lose focus on fundamentals. Following that pattern, let me begin with this observation: “This is a student.” Students are the primary focus of our mission and our work.

For the Benefit of the World

There are many ways in which BYU can tower above other universities—not simply because of the size of its student body or its beautiful campus, but because of the unique light BYU can send forth into the educational world.

I read that as a charge to not hide our unique educational candle “under a bushel” and a charge to share our gospel-based insights and ideas with the world—not for the praise of the world but for the benefit of the world. That requires a more concerted and coordinated effort, and to that end, BYU is embarking on a strategic messaging initiative.

Students are why we exist. How they develop—what they do, and, more important, who they are—is the ultimate metric by which our work will be measured.

The following branding statement was recently approved by the BYU Board of Trustees. This is not a replacement for the BYU mission statement. Rather, it is to help focus us on our inspired and inspiring mission.

We believe a world yearning for hope and joy needs the graduates of Brigham Young University. As disciples of Jesus Christ, BYU graduates are motivated by love for God and His children. BYU graduates are directed by living prophets and prepared to serve, lift, and lead. This preparation demands a unique university model: at BYU, belief enhances inquiry, study amplifies faith, and revelation leads to deeper understanding.

At BYU, helping students to develop their full divine potential is central to both our teaching and our scholarship. As the flagship higher education institution of The Church of Jesus Christ of Latter-day Saints, BYU strives to emit a unique light for the benefit of the world—a light that will enable BYU to be counted among the exceptional universities in the world and an essential example for the world.

Our students will not only become graduates who will eventually bless “a world yearning for hope and joy,” but they are also often the best means of conveying that unique light to others right now. Let me provide an example.

Our women’s soccer team played for the national championship this past fall. That remarkable athletic accomplishment gave them a platform to demonstrate their love of God and their Christian discipleship in a more visible and unique way.

The national championship match was originally scheduled to be played on a Sunday. Reflecting our understanding of the sanctity of the Sabbath day, BYU has a policy that it will not compete on Sundays. As required by its rules, the NCAA accommodated BYU’s policy and rescheduled the game to Monday.

That unusual move by itself generated publicity about the gospel principle of Sabbath worship and the importance of religious convictions. Instead of practicing on Sunday, members of the team attended church at a local ward, where some of them shared their testimonies in the fast and testimony meeting. That had an impact on those present and well beyond, as evidenced by social media posts.

Moreover, it brought attention to the fact that one of the members of the team, Josie Shepherd, was scheduled to begin her service as a missionary by entering the home MTC on the Monday of the championship game. The responsible ecclesiastical leaders gave permission for her to begin her MTC experience by participating in the missionary Zoom meeting from the team hotel on the day of the game. That led to other questions about missionaries, which allowed four other members of the team to publicly address their decision to interrupt their education and soccer careers to serve missions.

These are students—disciples of Jesus Christ who, led by prophets, can provide uplift to a world yearning for hope and joy.

If we remain true to our unique educational model, we will, as President Kimball prophesied, “become the fully recognized university of the Lord about which so much has been spoken in the past.” That is the destiny of BYU. “Surely,” as President Kimball observed, “we cannot refuse that rendezvous with history.”