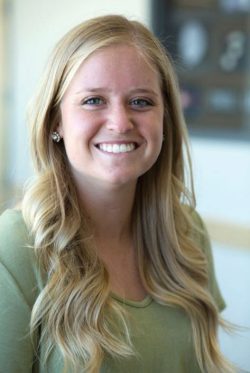 BYU student Jenny Pattison’s father was an airline pilot whose motto was “Work hard, play harder.” When he found himself frequently flying out of the Los Angeles International Airport, he bought a condo in southern California and told his kids, “If you work really hard this week, we’ll go to the condo and Disneyland this weekend.”

One time, he told 8-year-old Jenny that he’d take her to San Francisco. He brought home a book all about tourist destinations in the City by the Bay, and every night they’d read a few pages together. When the trip came, they toured the sites they’d read about - just the two of them.

“How Does This Keep Happening?”

When she was almost 11, Jenny remembers hearing, “Your dad has a tumor.” And at the time, there was no cause for worry.

“No big deal. He’ll have surgery, and he’ll be fine,” she remembers thinking. “He had surgery, and they gave him radiation therapy. And for a while, he got better. Then he picked us up from school one day and said, ‘I need to tell you guys I’m having another surgery.’ And I was thinking, ‘He’s going to be okay.’ And then he came back and said, ‘It’s metastasized to my lungs.’ And I thought, ‘How does this keep happening? Why do these doctors not know how to cure this?’”

Frustrated at the two years of her father’s back-and-forth sickness, health, and more sickness, 13-year-old Jenny sat down at her computer and started scouring the internet for whatever she could find about cancer. “I’ll cure cancer with this Google search,” she says, looking back on her naiveté.

“I started reading, and it went right over my head - it didn’t make sense,” she says. “I went, ‘This is more complex than I thought.’”

Jenny watched helplessly as her father’s condition worsened, leaving him bedridden, in pain, and suffering. At nights she’d lie awake in her bed praying, “Please let a miracle happen.” Later those prayers changed to “Please help me cope and deal with this, because it’s going to get even harder soon.”

Her father succumbed when she was just 15 years old.

As a freshman at BYU, Jenny was in Chemistry 105 when she saw something about summer fellowships at BYU’s  Simmons Center for Cancer Research (SCCR). After reading about the prerequisites - a 10-page proposal, a project mentor, research experience, etc. - she concluded it wasn’t for her. But as she progressed through her classes, she  began seriously thinking about doing medical school after BYU.

“I needed research hours, so I reached out to Dr. Grose about working in her lab,” she says. “I worked throughout the school year and was able to gain enough experience and understanding that I could work on my own project and apply for the summer fellowship.”

The next summer Jenny took advantage of a donor-funded fellowship and worked full-time as a cancer researcher at the SCCR - work she’s still doing today. Her research is focused on PAS kinase, a protein enzyme that regulates cellular respiration. In a cancerous cell, respiration becomes abnormal as the cell grows and divides at a faster rate than normal. She’s hoping that further characterization of PAS kinase and the pathways it uses to regulate respiration will reveal potential therapeutic targets for cancer treatment in the future.

“I don’t think there’s ever going to be one discovery that’s going to cure all of cancer,” she says. “Cancer is so complex, so every discovery is important and every lab’s work is important.”

Studying cancer isn’t always pleasant. For Jenny, it sometimes brings back unpleasant memories, and it sometimes compels her to confront difficult feelings.

“It’s really easy to kind of lock some of these memories up and not think about them,” she says. “But I’m a big believer that the trials that were put in our paths have the capacity to make us better so we can make the world better. I feel like it would be a waste of my experiences to lock it up and not let it change me. Cancer is one of those things that was placed in my life. I think about it every single day.”

Now Jenny is writing articles like the ones that baffled her as a 13-year-old. She’s searching and looking for answers, and one by one, those answers are coming. Through her fellowship at the Simmons Center, Jenny has found a way to turn her tragedy into something that could someday bless other families like hers.