A Legacy of Joy 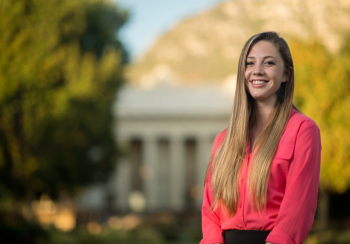 “Sometimes I’m surprised how happy we were,” she remembers. “We didn’t travel much and we didn’t always have the clothes that were popular in school, but we never wanted for anything.”

Regardless of their financial circumstances, the Quackenbushes have always found a way to live a rich life. As one example, instead of going to an expensive restaurant on Valentine’s Day, Anne’s parents, Roy and Sue, come home to a tradition they call “Café le Quack.” Their daughters don fake mustaches and black-and-white suits, prepare a table for two, serve a meal, and then give their parents a little time to themselves.

The romance Anne’s parents celebrate at Café le Quack each year began at Brigham Young University years ago. Sue’s Relief Society president assigned her to befriend Roy as part of a program called “be a real friend,” or “BARF.” They later married, graduated, and moved to the Pacific Northwest—but they’ve remained devoted to BYU ever since.

Growing up with her parents’ BYU pictures on the walls, Anne simply never planned to attend school anywhere else. “I remember looking around at different colleges and thinking, ‘I want to go to BYU. Why would I look at anything else when I know that’s where I want to go?’” she says.

All through high school Anne spent her evenings working—first at a clothing store and then at a pizzeria—to save money for college. When she was accepted to BYU, she also received an academic scholarship.

Yet after her second semester, Anne opened her grades to see a glaring C+ from a challenging course. She’d lost her scholarship. “I thought that C+ was the end of my life,” she says. “I already had a steady job at LDS Philanthropies, but I knew I would need more money. So I called a pizza place in town to get a second job.”

After a few days Anne realized that working all day at the office and then all night at the pizzeria was going to be unsustainable when the school year started—but she didn’t know what else to do.

“I’d just paid my tithing, and I was on my way to my shift the next day, thinking, ‘This is going to be hard,’” she remembers. “I noticed I had an email from BYU, and when I opened it, I found out I’d received a needs-based full-ride scholarship. I thought, ‘Yes—I can go to school now!’”

Even with that scholarship, Anne’s life is still far from luxurious: she’s still subsisting on quesadillas and other college-student food. But now, thanks to a donor like you, she’s pursuing her academic goals without overwhelming financial stress.

“My family is less stressed, and I’m happier because I’ve been taken care of,” she says. “[The scholarship] was an answer to prayer. Because I work at LDS Philanthropies, I know where that money comes from—and I’m really grateful for it.”

Anne’s now working toward a degree in global supply chain management, and recently, she was even offered a prestigious internship at a major U.S. corporation. She’s looking forward to starting her career and someday handing down the same legacy of joy and BYU tradition her parents gave her.

“My parents made home a safe and happy place for me, and I want to do that for my family as well,” she says. “If there’s anything I’ve learned from coming to BYU, it’s that if you have righteous desires and you’re willing to put in the work, you’ll be supported along the way.”