Give Everyone a Chance to Succeed 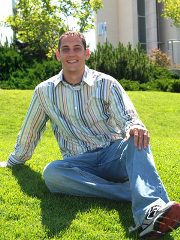 Jordan Houseman believes that everyone should be given a chance to succeed. The senior from Springfield, Ohio, will graduate with a degree in health science in July 2007 thanks to help received along the way.


“At the beginning of the semester we received a literal answer to our prayers,” said Jordan. “My wife, Lacey, and I have been raising our six-year-old nephew—also named Jordan—since last August, and we are expecting our first child in October. Little Jordan’s father left him when he was just a year old, and last summer his mother passed away unexpectedly. He had few options, so we made a commitment to raise him in a two-parent, gospel-centered home.”


Prior to that time, Jordan and Lacey were both full-time students, each working at least 20 hours a week. “We decided we didn’t want our nephew to be in day care,” said Jordan. “As a consequence, we had to juggle our school schedules and cut back at work so at least one of us could be with him. With expenses going up and income going down, we didn’t know how we could pay for my last semester of school. We received a grant, provided by donations to the school, which has been a major blessing in our lives.”


Jordan was attracted to BYU-Idaho to pursue both a temporal and spiritual education. “My education here has helped me in many ways,” he said. “I have been trained to be successful in everything I pursue by adhering to principles of honesty and integrity.”


“In his fall 2002 devotional address, Elder David A. Bednar said: ‘If you leave this university with knowledge and skills and a degree but lacking integrity and honesty, then you have failed. Conversely, if during your time at BYU–Idaho you make meaningful progress toward becoming a person of integrity and honesty, and having done your very best academically and you are still considered only an average student, then you will have nonetheless succeeded magnificently. And you will be well protected against the effects of the latter-day disease of dishonesty and the epidemic of ethical failures.’ This principle is taught again and again in classrooms.”

Jordan plans to add charity to the principles he has learned. “Our experience at BYU-Idaho has definitely changed our ideas about helping others in their pursuit of education,” he said. “Everyone should be given a chance to succeed despite their financial situation.”

Jordan plans to be a physical and occupational therapist and is interviewing for a graduate program that offers a dual degree in both programs.

When Karin Rice became a single mother with four small children, her feelings of self-worth hit rock bottom. For the first time since becoming a mother, she found she needed to work. With only a high school education, she knew she would not be able to support her family. “I prayed very sincerely about what I should do,” said Karin. “I soon realized the Lord wanted me to be in school.”

Most high school seniors would jump at the opportunity to get a college education, especially if they could do so on scholarship. Shawnee Lubeck felt incredibly blessed when she received not one, but two full-ride scholarships from two different institutions. So what did she do? She turned them both down and decided to attend BYU-Idaho instead.