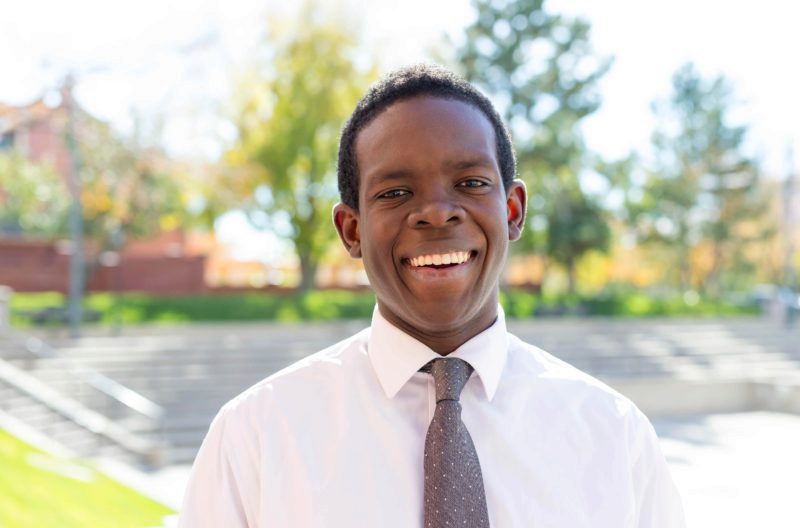 Nacha Dimanche’s home is an orphanage in Port-au-Prince, Haiti—but he isn’t an orphan. He was brought up primarily by his aunt because his parents could see the deep love between the two. After the devastating earthquake in 2010, his aunt opened an orphanage to care for those who had no one left. Nacha thereby has 21 “siblings.”

He visited his boisterous home for just a few weeks after serving for two years in the Georgia Atlanta Mission. While in Haiti he reveled in his unconventional family, worked long hours in the orphanage, and talked constantly with great joy about his mission. And then he flew to Salt Lake City to attend LDS Business College.

“I learned about LDS Business College from my mission president,” Nacha says. “He was very encouraging to me as I applied for the Returned Missionary Scholarship. At the same time, other friends were telling me about it too. They are all angels that Heavenly Father has put in my way to help me. They have set me up to have possibilities.”

Multilingual Nacha is studying business at LDSBC. His goal is to be of service to the people of Haiti. “Because of my own means, there is no way I could afford this—living in the United States, going to school,” he says. “In my country there is no money, no opportunity. At times it has felt like a mistake to have big dreams, but my aunt told me that I was made for something better, and she was right.”

Nacha compares the education he’s receiving to planting a seed. “The instructors water me up with the scriptures, the good habits of prayers, and their testimonies,” he says. “When I leave class, I am inspired to be someone better, to serve people, to keep the Spirit close to me.”

Nacha feels immense gratitude for his scholarship and has pondered what is expected in return. “I realize that I must turn back, look at someone else, and do the same: give possibilities to other people,” he says. “Donors may think they’re helping only one person, but it’s more than one person. For me, it’s a total family. It’s a total nation. It’s dreams. It’s hope.”

“This gift to me is something I will nourish,” he says. “From it I will produce other gifts and give to help others. In that way, like a ripple effect, millions of people will be helped. I’m so grateful for donors who allow themselves to be used by God. I am so blessed by their sweat and sacrifice. It helps me know I’m not alone.”