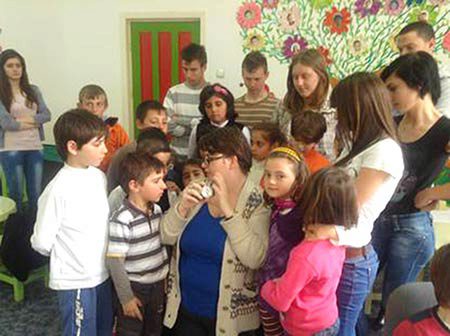 Alex Mic-Podar teaches children how to take pictures for a photo contest they held, where the children showed through pictures what childhood means to them.
© Alex Mic-Podar


Foster children in Romania knew nothing of old computers languishing in a Utah warehouse, or that students at LDS Business College were willing to rebuild those computers, until Alexandrina Mic-Podar made a phone call that started a chain of events to bring all three together.

As the administrator of the Podul Dragostei Foundation, a foundation established to address social needs such as the care of foster children in Romania, Alex felt she needed computers to give her academically deprived students a way to balance the educational scale.

Computers are hard to come by in Romania, she said, especially for a foundation on a rigid budget. Looking for a workable solution, she pondered her possibilities and remembered LDS Business College, where she’d earned a two-year degree in business and accounting in 2010. She wondered if old computers might be available there.

Unknown to Alex at the time, in a warehouse some distance away in Bountiful, Utah, was the Applied Technology Foundation, a 501(c)(3) nonprofit organization that was gathering discarded computers for the purpose of distributing technology to those in need, particularly to African refugees settling in Salt Lake City.

Leaders of the foundation Randy Burgoyne and Dennis Lifferth learned that many companies were willing to donate old computers, though they noticed that many were in poor condition and needed refurbishing.

They faced the challenge of finding a talented, low-cost labor force that could rebuild computers using parts from other computers. Where to find a capable workforce for minimal expense eluded them until Burgoyne, a distinguished alumnus of LDS Business College, called the school.

Just around the hill from them in downtown Salt Lake City was the director of the new information technology program at LDS Business College, Spencer DeGraw, who was sitting in his corner office pondering how to teach his computer programming students about the inner workings of a computer. 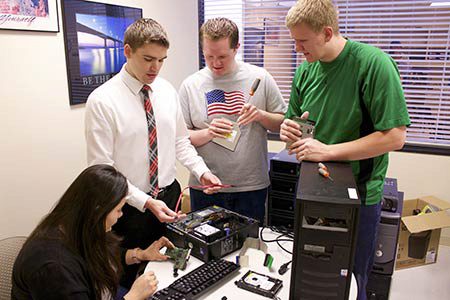 He had the students, but he needed a cache of computers to repair.

The stars quickly aligned. Today, students in the program are volunteering to help rebuild computers. For many, it’s the first time they’ve pried the top off a computer. In the last months, dozens of computers have been distributed among refugees in the Salt Lake Valley.

There is still one remaining piece of the puzzle, however. Currently there is no funding to ship several dozen computers to Romania. It is hoped that someday returned missionaries in Romania will be trained and employed to rebuild computers from the local area, but until then, donations are necessary to ship computers from the U.S.

To support the efforts to bring computers to Romanian foster children, those wishing to donate may visit the Applied Technology Foundation.