Paying It Forward: The Jensen Legacy 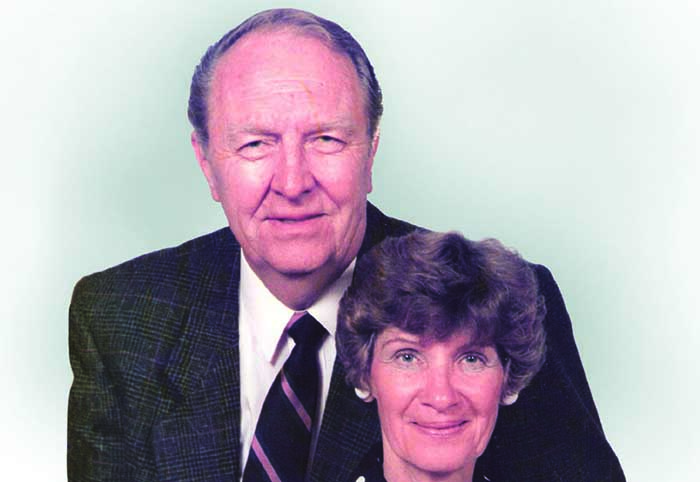 Richard Jensen liked to say that, as a young boy growing up in Montpelier, Idaho, during the Depression, he learned “the dignity of work.” At only six years old he was given the responsibility of herding the family’s milk cows morning and night. After serving in the U.S. Army for three and a half years during World War II, he served for two and a half years more as a missionary for The Church of Jesus Christ of Latter-day Saints in Copenhagen, Denmark. While there, he met his wife-to-be—the mission president’s daughter, VaLeen Sorensen, from Salt Lake City. In later years they were actually called back to serve in the Danish Mission, with Richard as mission president.

VaLeen grew up learning to give service. On many occasions, someone in need would knock on the door of VaLeen’s childhood home and ask for food. Her mother, Minnie, never turned anyone away and always provided a meal in a manner that allowed the stranger to maintain their dignity.

Richard’s goal was to provide for his family in a way that had been difficult for his parents during the Depression. With this determination, Richard enrolled at LDS Business College. His good nature and work ethic prompted classmates to select him as student body president. He graduated as a certified accountant with experience in business management. Richard was later honored to be a recipient of the college’s highest recognition, the Distinguished Alumnus Award.

Richard’s academic years prepared him well for business, and small beginnings turned into a distributorship. In time, Richard became the world’s largest importer for the Swiss Bernina sewing machine.

As the business prospered, the Jensens were able to fulfill a lifelong dream and purchase an 1,800-acre ranch where family could gather to work and play. VaLeen, mostly a city girl, thought Richard would be happy with maybe a dozen cows. She was rather surprised when trucks arrived, unloading about 300 cows.

Business success also provided the Jensens with the resources matching their desires to help others. Following their parents’ example, they sponsored countless missionaries, donated sewing machines to fundraisers, and made many anonymous contributions. Whether it was with loaves of freshly baked bread, kind letters mailed with a few dollars enclosed, or some other way, Richard and VaLeen sought to help others. In his journal Richard wrote, “Time has enhanced my perspective. As I grow older motives have never changed but rather continue to enlarge. It is very important to me to always offer honorable service to all with whom I associate.”

Thirty years after purchasing the ranch, and with many fond memories, the Jensens decided it was time to sell it. Through a charitable remainder trust* they created, they were able to fulfill their next heartfelt desire: helping others seeking their foundational starts in life. The charitable remainder trust, at its termination, funded a significant endowed scholarship to LDS Business College. “Their donation will bless students’ lives for generations to come,” says President Bruce C. Kusch. “It will give students in need the opportunity to finish their education as well as the ability to enter the workforce with the confidence and skills needed. We are grateful for this gift that will bless so many.”

*A charitable remainder trust (CRT) is an irrevocable trust that generates a potential income stream for you, as the donor to the CRT, or other beneficiaries, with the remainder of the donated assets going to your chosen charity or charities. A short, easy-to-understand video about CRTs can be viewed here

Membership in the F. Y. and Anna Fox Society is open to anyone who invests in the future of LDS Business College through a planned gift. Members of the society regularly receive information on the progress of the college and are invited to an annual society event.

We invite you to join the F. Y. and Anna Fox Society. If you have already put in place a deferred gift arrangement— such as a bequest in a will, trust, gift annuity, or life insurance policy—naming LDS Business College as a beneficiary, please contact the Gift Planning Services at Philanthropies, a department of the Office of the Presiding Bishopric. If you are considering such a gift arrangement, please contact our office for more information at 1-877-650-5377.