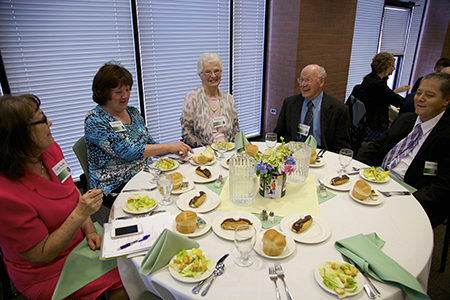 Jim and Lena Bromley, well known in the community for their goodness and tireless service, were introduced as the first co-chairs of the F.Y. and Anna Fox Society during the annual luncheon on March 28.

“We’re not famous and we’re not celebrities,” Jim said. “But we love LDS Business College. We feel there is something magical about the school.”

The two dozen or so members of the Fox Society who had gathered on campus see LDS Business College as a small school that is doing great things — well beyond the proportion of its size. 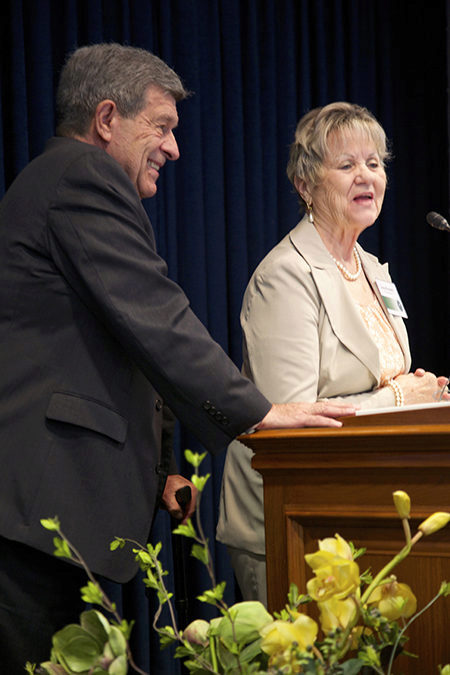 “The Fox Society is the bedrock of this College,” he continued. Feramorz Y. Fox was one of five in his graduating class in 1898 from what would become LDS Business College. He and his wife, Anna, were quiet people known for their generosity, hard work and love. When he became president during the turbulent Depression and World War II years of 1926-1948, he took a cut in pay to keep the College functioning. His desire was for everyone to gain an education, no matter their economic status.

Tyler Workman, a second semester student, spoke of his “tumultuous” journey through education and noted that he never felt like “college material.” But feeling a void in his life after returning to his home in Ft. Lauderdale, Florida, following his mission, he accepted the counsel of an older brother to attend LDS Business College, where he had attended.

“I wish I had the power to express the depth of my feelings for this College and how it is giving me hope for a future I never thought I had,” he said.

Though he served in the nearby Idaho Pocatello Mission, Tyler had never set foot in Salt Lake City. When he arrived, he found the grounds beautiful and the Spirit strong on campus. 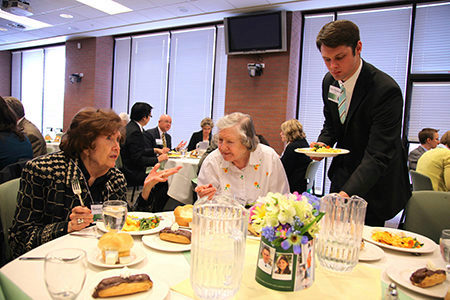 “I feel ennobled and enabled,” he said. “Where I lacked direction, now I have goals and ambitions and big dreams.” For his efforts, he is on the dean’s academic list.

The College is being true to its directive, said J. Lawrence Richards, president of the college. “We are uniquely positioned to help those students who need to be made market-ready quickly with skills and experience,” he said. To do that, the College is recruiting fewer high school graduates and, instead, positioning for returned missionaries who have developed discipline and study skills, and who wish to move quickly to their responsibilities as providers and protectors of their families.

As well, the College takes seriously the need to improve the education and skills of those who are underemployed — the gray collar market — that often feels hopeless and held captive by an inability to compete in changing markets. “There is a perception,” continued President Richards, “that a two-year degree is less valuable than a four-year degree.”

But the world has changed, he said, explaining that there is a misalignment between skills and technical jobs in the marketplace. The market is desperate for highly skilled abilities, while the need for professional skills is not growing.

Where a four-year degree was once the best hope for a secure future, he said, the new economy prizes those with hands-on experience.

For their contributions to LDS Business College and their steady support of students, President Richards thanked the generous donors of the F.Y. and Anna Fox Society by saying they were able to see beyond the horizon, noting how their planned gift will bless students they will never meet, and who will never know them.

“You are enlisted in the most worthy of all endeavors — the realization of the fullest possibilities of the human soul,” he said, quoting F.Y. Fox

Become a member of the The F.Y. and Anna Fox Society

The F.Y. and Anna Fox Society recognizes donors to the College who have invested in the future of the students at LDS Business College through a deferred gift, such as a bequest in a will, trust, gift annuity, retirement policy or life insurance policy.

There are no costs associated, nor is there a minimum gift amount. Documentation, while helpful, is not required. If you think you qualify, or if you would like more information, please contact David Smith at 801.422.7205 or legacy@churchofjesuschrist.org.

The foresight of these members reaps great rewards for the College and its students.