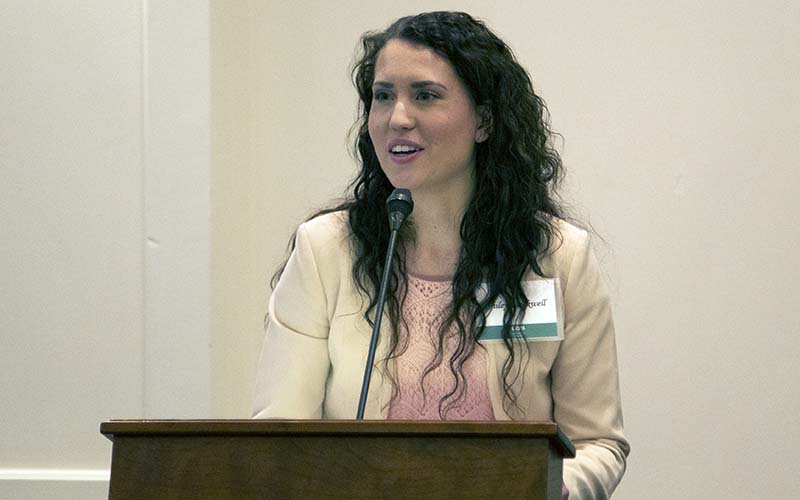 As a senior in high school anxiously awaiting graduation, Shiley Blackwell from Moapa, Nevada, had already chosen to attend a small college in Colorado, where she would major in agriculture. “In my 17-year-old mind, my plan was perfect,” says Shiley. However, oftentimes our plans are not Heavenly Father’s plans, and one day as she was driving to work after school, Shiley had a distinct prompting to reevaluate her college plans. Feeling a little distraught but trusting in the Lord, she began researching other schools and almost immediately felt the need to learn more about LDS Business College.

“I’ll never forget that tour,” says Shiley. “As we walked around the building, I felt that I had come home. This was where I needed to be.” At the time, she couldn’t logically explain why or how, but she knew deeply that she needed to be here. “I changed my plans,” continues Shiley, “not knowing how it would all work out, and took a step in the dark in complete faith.”

After being accepted to LDS Business College, Shiley received a much prayed-for and greatly appreciated scholarship because of generous donors. She saw the scholarship not only as a tender mercy from the Lord but also as someone making a substantial investment in her future. This combination of sacrifices—her own and others—encouraged her to work harder than ever in her college studies.

As is often the case, Shiley now looks back and sees why Heavenly Father prompted her to come to LDSBC. “An education here has stretched me out of my comfort zone in the best ways, and I’ve found a passion for learning and a thirst for knowledge,” explains Shiley. “This has given me a greater ability not only to think but also to act and opened doors for me that I would have never even thought possible.” After just two semesters (and a switch from agriculture to marketing), Shiley obtained a highly sought-after internship in Texas, where she was able to learn from some of the best minds in the industry. Now, as she completes her degree, she will be working at her dream job in Utah. “The Lord has done more with my life than I could have ever imagined,” says Shiley. “When we follow His mind and will, extraordinary things follow. I know that the way I learn and serve, and ultimately the way I live, is forever changed because of LDSBC.”

Shiley is just one example of how donors are changing lives through their charitable contributions. “Donors are helping us obtain not only an education but also a better life,” says Shiley. “While I don’t personally know the names of the individuals who have donated to the scholarships I’ve received, I do consider them quiet angels who have helped shape my life for the better.”