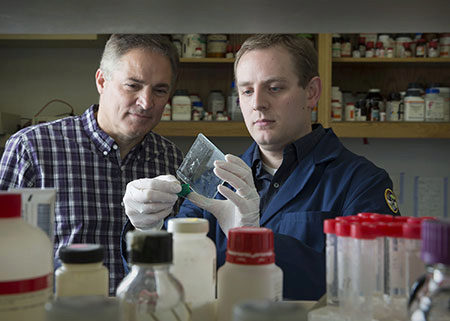 Christopher Tracy considers his research as a doctoral student in biochemistry as a race against time.

“Through my research I hope to understand diseases so we can unlock new or improved treatments to help people lead more full and enjoyable lives without the burden of illness,” he said. “After completing my PhD I would like to work in the pharmaceutical or biomedical industry as a lead researcher.”

Because of his studies at BYU with his advisor, Dr. Barry Willardson, and a paper he helped write as the lead author that was published in the Journal of Biological Chemistry, he is well on his way to establishing credibility in a highly challenging field.

Many labs have been searching with limited success to learn the key processes in how proteins can be used to suppress cancerous tumors, he said. Dr. Willardson and his team of researchers, including Chris, happened onto a major step in that process while looking for something else.

Proteins, in a sense, are like teenagers, Dr. Willardson said. “You can learn a lot by noticing who they hang out with.” This observation prompted the team to search for the “buddies” of the molecular chaperone proteins, which prompted conducting experiments from a different perspective.

“It’s a great type of experiment because it tells you things that you may not have considered,” Dr. Willardson said.

“The paper was the result of years of research that, at times, seemed it would never produce viable data,” Chris said. Finally, after much work accompanied by prayer and fasting by the professor, fellow researchers, and their families, “we unfolded new ideas that led to clever research results and the publication of the paper,” he said. “The paper was chosen as the article of the week by the journal, which resulted in it being highlighted on the publication’s website and spotlighting me as the lead researcher.”

Such significant results, emphasizes Chris, come from tenacious research on the part of many people.

He attributes developing his dogged tenacity from his father, who, he said, “works hard to achieve goals” and who prizes education, though he was not able to complete his formal college education.

“Because of his example and support, I feel honored to be the first member of my family to obtain a PhD,” Chris said.

To donors who eased some of the strain of providing for his family, he said, “I would tell them that through their help and contributions I was able to perform world-class research and earn a PhD, all while beginning my family during my time at BYU. I will be forever grateful for the support I received through scholarships and fellowships.”