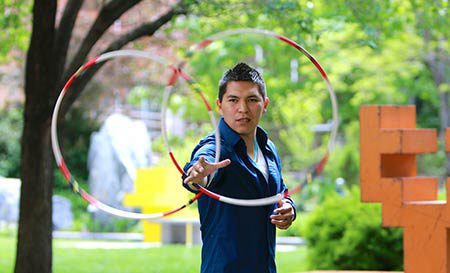 Life on the reservation was quickly unraveling around young Jerad Todacheenie. He had a compelling sense that if he didn’t get to a better place - and get there fast - he’d never see his 18th birthday.

“I’d always been told that life in the Native American culture was a dead end of alcohol and drugs,” Jerad said. “My life was on that course.”

Those mid-teen years were a frantic time, Jerad said. Everything seemed to be spiraling out of control. His father, who had spent time in prison, had bolted from the home in search of his second wife, who was a heavy drug user, and had abandoned the family. Gang members, the closest thing Jerad had to friends, were dying all around him from violence. He was getting too close to the use of alcohol as a way to numb the pain.

With all that, this 14-year-old, whose one passion in life was playing sports, was abruptly thrust into managing his father’s electrical business, along with two uncles about his same age.

Jerad recognized that, despite his responsibilities, he had to get to higher ground. “I always seemed to have a moral compass that influenced my decisions,” he said. “Sometimes I suppressed it, but I seemed to know what was right, even when those around me had no idea. I knew I had to get away from these problems.”

“School teachers knew my family situation so they didn’t expect much of me. They passed me through class so I could play sports,” he said. Sitting in one of those classes, when he was more engrossed in his daydreams than in the discussion, he remembered his father’s host family in the former Indian Placement Program. As a participant in this program, Jerad’s father had left his home during the school year as a boy and stayed with an LDS family in Utah in order to improve his educational opportunities.

On this day in class, as Jerad considered his future, the idea to call his father’s foster family popped into his head. To his surprise, that day he returned home to find a copy of the Book of Mormon on his bed. To this day he has no idea how it got there.

He recognized the book. “It was still in its plastic wrapping,” he said. It had been given to him years before as a present from his father’s foster family. When it was given to him, he didn’t think much of the book at the time and tossed it indifferently into the bottom of his trunk.

“I’d forgotten all about it until it suddenly appeared on my bed that day,” he said.

Finding the Book of Mormon was all the encouragement he needed. He called Jill Hatch, his father’s foster sister in northern Utah. “I could tell from the background noise that I had called during a family party,” he said. “She listened to my plea, then hung up to discuss the matter with her husband, Steve.”

In less than two minutes she returned the call to Jerad saying they would eagerly take him into their home, providing, he said, that “I lived by their rules and standards. She said she’d call later with plans to pick me up. I assumed it would be several days.

“Less than five minutes later she called to say that her father, who was the foster father of my father, had already grabbed the keys to his truck and was driving to pick me up. He wasn’t waiting for a bus or a good night’s sleep. He took off in the dark of night without regard for himself.”

Before noon the next day - as Jerad was summoning the courage to announce to his grandmother and great-grandmother that he was leaving - Bob Roundy, his father’s foster father, pulled up to the Todacheenie home in Aztec, New Mexico.

With a short farewell and a few tears, Jerad said goodbye and was on his way to a new home and a new life.

Living with his foster family was decidedly different. He had curfews and expectations about homework, conduct, and family chores. “I was so grateful to be there that I didn’t want to do anything that would lose trust in me,” he said. Jerad was often quiet and kept problems to himself, like the pain of withdrawal from substance abuse.

Life soon improved as he tasted the joy of learning and making friends. He felt the love and support and protection of his foster family. They believed in him, which strengthened his sense of worth and imbued in him a desire to be still more diligent.

One Sunday afternoon following Church meetings, Jerad surprised himself and his family by sharing his testimony and asking to be baptized. After some investigation, his foster father learned that Jerad had been baptized at age nine, though he had absolutely no recollection.

In his home of love, Jerad continued to grow academically and spiritually. One day a few years later in high school Jerad learned that his math teacher was Native American. He developed an admiration for his teacher and what he had accomplished. When he learned his teacher was an expert hoops dancer, able to spin dozens of hoops at a time, a desire welled up within Jerad to be like him.

His teacher took a sincere interest in him and helped him master the skills. In a short time, Jerad became proficient in spinning hoops, creating a dizzying display of motion.

As high school graduation approached, Jerad was caught off guard one day when the teacher encouraged him to attend BYU and try out for Living Legends, the performing group featuring Native American and other cultural dances.

“I was the first in my family to graduate from high school,” he said. “I had never considered going on to attend college.”

He heeded the counsel and applied to BYU. After being accepted, he deferred to fill an LDS mission to Mongolia, where he was intrigued by meeting others who reminded him of his Navajo ancestry. 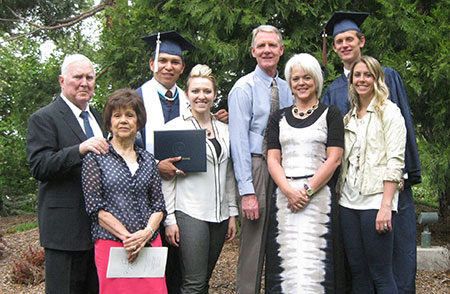 He returned to BYU and did, in fact, participate in Living Legends. He recently received his bachelor’s degree in psychology, graduating in April along with his foster brother, Mitch.

During his five years at BYU, Jerad toured many countries, pleasing audiences in Russia, China, Guatemala, Honduras, and Nicaragua, as well as in California, Washington, Oregon, Idaho, and Washington, DC, where he performed for ambassadors and foreign diplomats.

His performance is a visual kaleidoscope of color and light-footed dance that appears effortless as he spins and twirls hoops in opposing directions.

“Jerad is an elegant dancer who speaks with elegance,” said Janielle Christensen, artistic director of BYU’s Living Legends. “It takes your breath away to see his hoop dance. He has great reverence for his ancestors and you feel it in his performance. His devotion to excellence lifts the whole show.

“He’s a soft-spoken, deeply spiritual young man, who, true to his culture, doesn’t seek the spotlight but is willing to do whatever is necessary to share the message. Many times I’ve called on him to address the press with their flashing cameras.” 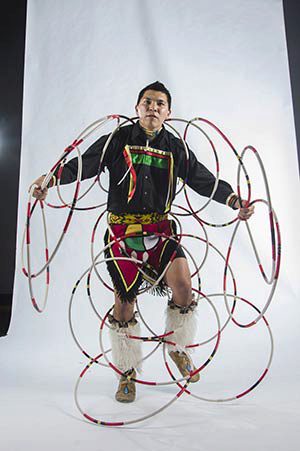 Beyond his performance, Jerad holds a lot of influence over other young men who see themselves in him. “Performing among the Native American students in Alaska or his home in New Mexico or among those on reservations, many boys have come up to him afterward with hugs and tears to thank him, and to say that he has given them hope to overcome their circumstances,” Christensen said. “His message to them is, ‘I’ve been there, and with education, you can be where I am.’

“To watch a handsome young Native American college student performing a show-stopping hoop dance at a school assembly, and then to have that student step back out on stage after the final curtain call dressed as a regal chief to tell his story, is profoundly moving to a young student who needs hope, who never dreamed that something like that would be possible for him.”

Jerad is quick to acknowledge the Lord’s hand in his life, from the case of the Hatch family, who reached out to him in a time of despair and welcomed him into the love and security of their home, to generous donors who gave of their treasure that he might improve his life through education.

“School was hard for me,” Jerad said. “Learning did not come easily. I needed the help of others to learn and to afford school. I hope I’ve returned some of their generosity by bringing a message of hope and inspiration to others who are struggling to find a better way. I could not have done this without generous assistance.”