Announced in early February 2015, construction on BYU’s new Marriott Center Annex began with a groundbreaking ceremony on November 30, 2015. The building is anticipated to be completed in fall 2016.

“Our men’s and women’s basketball teams have been very successful, and this new facility will certainly enhance both programs,” says Tom Holmoe, BYU’s athletic director. “We would like to express our appreciation to the BYU administration, the board of trustees, and the many donors who have made this project a reality - particularly Ruth and Rex Maughan, who made a generous lead gift.”

Over the last decade, Dave Rose, BYU men’s basketball head coach, has labored to make the program one of the best in the country. He predicts a dedicated practice facility will meaningfully propel the team’s progression. “This facility is a major commitment to our basketball programs,” says Rose. “It will enhance recruiting, the student-athlete experience, and the development of our players.”

The annex will feature a replica of the Marriott Center floor with added shooting areas on the sides of the court. It will also include a strength and conditioning center, training rooms, office suites for the men’s and women’s basketball programs, meeting rooms, and a BYU Basketball Hall of Honor.

At the groundbreaking President Kevin J Worthen spoke about the importance of the facility. “This is not just about basketball. Basketball is really important, but [the men's] and the women’s teams are some of the most visible representatives of what we’re trying to do at this university .... It is [about] being excellent in everything you do.”

As has been the case with previous BYU athletics facilities, the annex was fully funded by donations. Rex and Ruth Maughan and Keith and Melisa Nellesen are among the building’s principal donors.

In 2013 Jimmer Fredette visited Rex Maughan in Scottsdale, Arizona, to invite him to donate in support of a much-needed practice facility for BYU. “He walked into my boardroom, and I had no idea he was coming,” says Rex.

Rex listened to Jimmer’s request, and after considering the plan, he and Ruth signed on. “Ruth and I are excited to be a part of helping BYU build a great facility,” says Rex. “I love the plans and think it will be a wonderful asset not only for the players but also for the coaches. I think the location is just right, and it will be a great thing for the basketball programs and campus. We’re proud to be part of it.”

Keith Nellesen says, “Coach Rose has done an amazing job building a quality program, but in today’s world, to compete at the highest levels, you must not only have a great program but also facilities to match. This facility will be second to none.”

Rose extends his gratitude to all who contributed to the building. Jeff Judkins, BYU women’s basketball head coach, says the annex will better prepare student-athletes to achieve their goals - both athletically and academically.

In 12 seasons under Judkins, BYU women’s basketball has won 20 or more games in a season eight times and has qualified for postseason play 10 times, including six NCAA tournament appearances and two trips to the quarterfinals. His teams have also captured two conference championships and two conference tournament titles. In addition to team success, Judkins’s players have collected 10 first-team all-conference citations and four conference player of the year awards.

In the basketball seasons from 1903 to 2015, the men’s team has had 1,728 wins, ranking it 13th in total victories among NCAA Division I programs. The Cougars have earned 29 conference championships and 38 postseason tournament invitations. BYU players also have 122 all-conference and 80 all-America citations, and 45 BYU players have been drafted into the NBA. 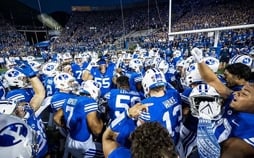 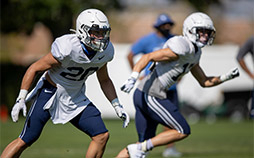