Surrounded by the endless rock and sand of the Gobi Desert, hundreds of miles away from her home in Ulaanbaatar, Buyanerdene Chimedregzen shouted aloud with joy when she received news of her acceptance to Brigham Young University-Hawaii.

Her three long, grueling years of studying English through the university’s online program were paying off: her dream of studying at BYU-Hawaii had finally come true.

Buyanerdene’s parents always wanted the best for her and her siblings. When Buyanerdene was young, her mother prayed fervently for the welfare of her children. After a time she felt that nothing seemed to come of her prayers, yet she prayed still more for guidance.

One day while walking, as much by chance as by good planning, Buyanderden’s mother noticed a white building that had never caught her attention before. Intuitively she sensed it was a religious building and felt to go in. As soon as she stepped inside the Latter-day Saint meetinghouse, she was enveloped in peace and happiness - the very feelings she had longed to find.

The next day she invited missionaries into the family’s home, beginning a chain reaction of miracles that changed the lives of her children.

In those days, few Church materials had been translated into Mongolian. “The American missionaries showed us an English version of the Book of Mormon and shared several passages,” Buyanerdene says. They also left a one-page translation of 3 Nephi 11 in Mongolian with a challenge to pray about the book’s truthfulness.

“At that time no one knew English from our family,” she says. “But we had enough faith to accept the challenge. I put down the English version in front of me and read the one-page translation in Mongolian. Then I knelt down and prayed sincerely to know about the truth. After my prayer, I felt a warm, joyful feeling inside, which I had never felt. I knew that the Book of Mormon was true.”

On February 21, 2001, Buyanerdene and her whole family were baptized.

Through all these challenges, their mother’s faith burned bright, sustaining the children by encouraging them to attend youth activities and remain active in the Church.

“Because of her great faith we all served missions,” Buyanerdene says. “My brother and sister have each married in the temple with spouses who are returned missionaries.”

Buyanerdene was called to serve in the Baltic Mission - which includes Estonia, Latvia, Lithuania and Belarus - speaking Russian. Because of visa delays she spent five months proselyting in Moscow before arriving in her mission. “Although I was a recent convert to the Church, I was able to share my testimony and help others find the restored gospel,” she says.

After her mission, Buyanerdene’s desire to attend BYU-Hawaii sparked when she learned of the IWORK program and the possibility it gave her to finance her education through opportunities.

She enrolled in a BYU-Hawaii Online English training class, and after three hard years she completed the course and received her acceptance to the university.

From Buyanerdene’s first day on campus she recognized the blessing it is to study at BYU-Hawaii. “Every single day I sought for opportunities to grow spiritually and academically so I could become genuine gold to bless the lives of many people in my country,” she says.

Her ambition to learn led to opportunities to serve in the temple, lead her ward Relief Society as president, work as an accountant, and organize a gospel forum for the Mongolian chapter - all while being a dedicated, full-time student.

After years of steady study, Buyanerdene was draped in colorful leis at graduation time, as is customary in Hawaii, having completed a degree in business management and earned a certificate in entrepreneurship.

Buyanerdene’s education included certification on the SAP TERP-10 program. “It was very hard for me to prepare for the test,” she says. “I was not familiar with the software,” which is designed to improve alignment, productivity, and insight while reducing cost and risk in production processes. 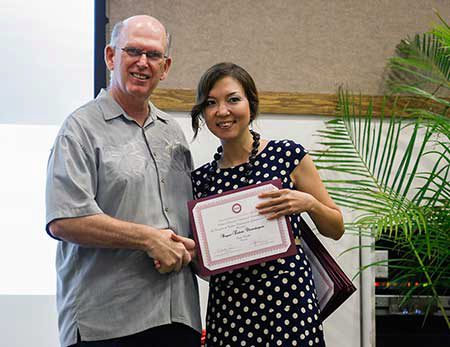 “It required me to study much harder than ever before,” she adds. “I am thankful for my great professor, Brother James Lee, who taught us and encouraged us, even coaching us until midnight.”

Her hard work and long hours paid off: “I passed,” she exults.

PREPARING FOR A BRIGHT FUTURE

Her training paid quick dividends. Last summer, Buyanerdene attended a Career Connect event in Mongolia with BYU-Hawaii President Steven C. Wheelwright. As the only candidate with TERP-10 training she drew the attention of the top companies, eventually landing an opportunity to be considered for a job as a lead accountant.

Buyanerdene looks forward to using what she learned while attending BYU-Hawaii to bless her people in Mongolia. She hopes to operate her own business in her home country, and she anticipates the day when she can use her experience serving as an ordinance worker in the Laie Hawaii Temple in a future temple in Mongolia. “I’m excited to build the kingdom in Mongolia,” she says.