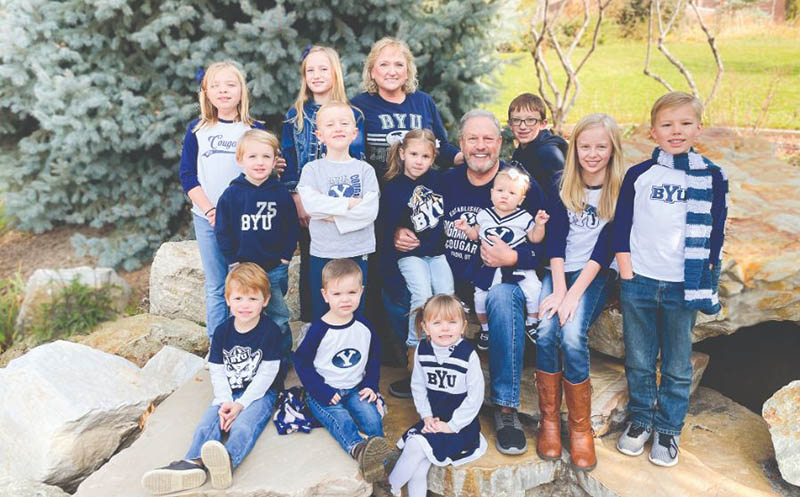 It’s no surprise that support for BYU runs deep in the Spencer family. Their BYU connection is strong and seems to grow stronger with time, spanning generations.

Sheri and Dennis Spencer met at BYU. Their children have all graduated from BYU, says Sheri, who considers BYU an extension of her home. In fact, her parents were students at BYU when she was born.

When Sheri was a child, her father became a BYU professor of mechanical engineering. In search of creative ways to teach the physics and math of engineering, he would sometimes drop eggs from the Kimball Tower or have students construct and fly paper airplanes in the Smith Fieldhouse. For Sheri, BYU was a place of adventure.

“I would go to work with him in the summer and spend hours in the children’s section of the library reading every book I could get my hands on,” says Sheri.

Some years later, Dennis was working on his degree at the BYU Marriott School of Business when he and Sheri met. When he graduated in 1983, the recession was in full swing. He remembers interviewing with the Big Eight accounting firms, with little success. One firm that normally would hire 400 graduates a year was hiring only five. He was advised to try to find something in his hometown, which he did.

Boise was where Dennis had wanted to raise his family anyway. For that reason, he prefaced his marriage proposal to Sheri with “Will you move to Idaho?”

Dennis was hired by a bank in Boise. From there, his banking career took them to many places in Idaho and Utah, and also from California to the Carolinas. As of early 2022, he works from home. The two have returned to Utah, where Sheri is back on campus pursuing the degree that felt out of reach when she was younger.

“I grew tired of explaining why I’m the only one in the family without a degree at BYU,” says Sheri, laughing. “Even our children’s spouses graduated from there.”

Sheri’s recent experience at BYU has only enhanced her love and support for the students. Sitting in class with “those cute little freshman girls” who sometimes announce they have a mission call has had an impact on her. “I wouldn’t want any of them to miss out on this opportunity because they can’t afford it,” she says, recalling her own financial challenges as one of nine children. Now, reflecting on their blessings, the Spencers feel the need to pay it forward.

For the Spencers, providing financial support to BYU is a natural extension of who they are. They figured out early in their marriage that giving smaller amounts monthly made it easier. “I learned that my employer would match my donations,” says Dennis. “It just became a habit for us.”

Recurring gifts are a convenient way to give, and it is easy to adjust upward as a person’s career progresses, he notes. “You can give a little more—have a little more impact—and not feel the pinch,” Dennis says.

Sheri says, “When we learn of the amazing things that are happening at BYU, we just want to help.”