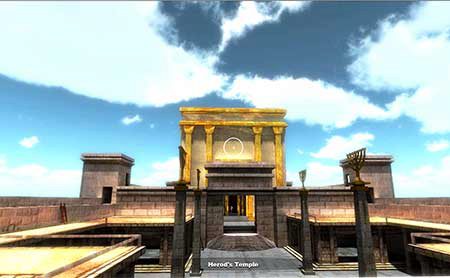 As they listened to lectures on the life of Christ in their New Testament class at BYU, three animation students began to ponder what it would be like to be eyewitnesses to such grand events. What would it mean to get a sense of the grandeur of Herod’s temple, to sit at Jacob’s Well, or to climb the steps to the Upper Room?

They certainly couldn’t go back in time to Old Jerusalem, and they weren’t likely to spend vacation time in the Holy Land. But, they reasoned, they could use their animation skills to bring the ancient city to life.

Soon a project began to formulate in their minds. They started creating a video game–like walk-through of the temple of Herod and the inner court.

The project became a passion. Working long and odd hours, they had soon created an app that mimicked the look and feel of a bygone era. Later, when the Church’s Motion Picture Studio added modifications, the app enabled viewers to twist and turn an electronic tablet to see the ancient city from all angles and gain a sense of what it was like to stroll the dusty streets of Jerusalem.

This early creation was an instant hit among fellow students. For those studying the New Testament, the dots suddenly began to connect. A city built out of white stone - as Jesus would have known - became virtually real, helping them relive a time, setting, and culture that was totally foreign to them.

Tyler Griffin, assistant professor of religion at BYU, was intrigued by his students’ enthusiasm for this virtual walk-through and offered it as a download to his students during the next semester.

He knew he’d stumbled onto a meaningful way to engage the rising generation when 489 of his 495 students downloaded the app within 36 hours.

Because of the avid interest in the app, it became obvious that this virtual map of Jerusalem needed to be expanded. Discussions followed. In addition to helping students understand the teachings of Jesus in New Testament times, the app’s developers wondered, how could virtual experiences aid in understanding the Book of Mormon, to hear and see the scriptures in context with the times and cultures?

What would it mean to a student to walk into a virtual cave and watch as Mormon carefully abridged the plates? Would the history of the Book of Mormon come to life and suddenly make sense to young students if they could get a feel for the various plates that comprise the book?

Would the doctrine be more pronounced if they could see a connection between Captain Moroni, who repeatedly built bigger and better fortifications to protect his people, and the need to constantly re-arm, rebuild, and repair personal testimonies against the mounting spiritual dangers of today? 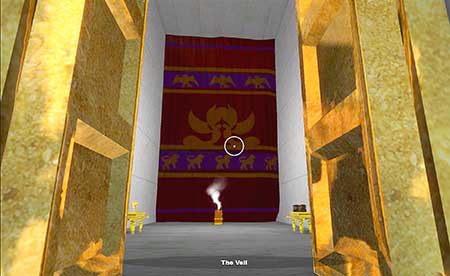 The challenge, say educators of today’s youth, is to teach the gospel in such a way that the doctrines go deep into their hearts with such fire and conviction that their testimonies will be firmly set against a culture where traditional values are eroding away in large chunks.

“The purpose,” said Taylor Halverson, a BYU Center for Teaching and Learning consultant, “is not to use virtual imagery as a toy, but to apply it in ways that help motivate people to study the scriptures to gain new insights.”

“The Lord has given us these tools. Now we need to discover how to use them,” said Seth Holladay, an accomplished animator who left his job at Pixar to teach animation at BYU. Paraphrasing comments by Elder David A. Bednar of the Quorum of the Twelve, he noted that today’s youth were blessed with finger dexterity for greater purposes than mere double-thumb texting.

The Department of Ancient Scripture at BYU is ideally situated to create virtual experiences with the scriptures, Brother Griffin said. First of all, “Here at BYU we have the ability to research and create the content. We have the technical skills from an animation department at BYU that is among the very finest in the country.” That such a highly regarded and talented department is on campus is no coincidence, he said. Also, there are more than 200 religion classes taught each semester where they can test these products.

The opportunity to virtually recreate historical settings is bound only by imagination. With the 200th anniversary of many Church historic sites coming up - beginning with the Sacred Grove in 2020 - there are more opportunities to help others visit sacred sites without leaving the comfort of home.

“We have the technical tools and talents,” said Griffin. “All we lack is the funding to pay the animation students to create the virtual experiences. The costs are not great comparatively, but the rewards will be monumental.”

Times are progressing, he continued. The youth of today learn best with hands-on activities. With new immersive technologies, students will accelerate the growth of their testimonies in a time when the Lord is hastening His work.

Your donation to the Religious Education Department will go toward paying wages to the students who create these virtual experiences. This project will be a double-edged blessing to the rising generation. First, it will help the animation students pay for their education and develop their skills for careers in the entertainment industry, where their voices for good and wholesome entertainment can help shape media values. Second, these virtual experiences will strengthen students’ testimonies, enhance their learning, and help them better understand the gospel and how to live its principles. 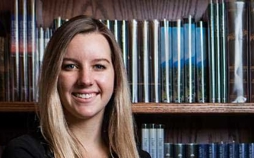 The Scholarship Was Just the Beginning