Since 1976, BYU has been the consistent recipient of ExxonMobil’s generous donations. Many of those donations were matching gifts, where donations made by company employees are matched three-to-one by the giant oil company.

It’s a reciprocal gesture of good, said President Worthen while accepting the check. He noted how donations improve the program, which produces better students, who make better employees, who then advance the company, which produces more funds for more scholarships.

“It builds on itself,” he said. 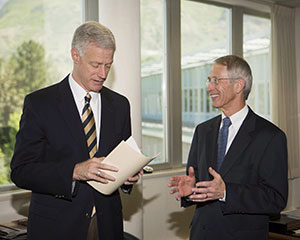 The hope is to attract young people, as well as support programs that encourage women and minorities to become scientists and engineers, stated a press release.

Forsyth noted how he came from a small city in Idaho and earned an undergraduate and law degree at BYU. “There is a lot of blue in our family,” he mused.

In brief comments, deans told how funds will be used in their colleges. Such uses include the preparation of math and science teachers in secondary schools, and the aiding of undergraduate students in graduate school-like research projects.

In total, ExxonMobil and its employees will donate $44 million among 866 universities in the U.S.     as part of the ExxonMobil Foundation 2013 Matching Educational Gift Program.