An Act of Generosity Changed Their Family Forever

Early in their marriage Roy and Carol Christensen heard a story in a church meeting that changed their lives. A young mother told of a time when she and her husband had an unexpected opportunity to adopt a longed-for child, but the costs were higher than anticipated. She had shared their situation with a few people, and shortly thereafter they found an envelope in their mailbox containing the needed money.

Speaking in church after the passage of time, the mother said that not only had this act of generosity changed her family forever but also her perception of those around her. Unable to identify who had left the money, she and her husband decided to treat everyone as their benefactor.

“Knowing this family, hearing their story, and seeing the joy that they freely shared turned on a light for us,” says Roy. “This example of anonymous kindness inspired us to regularly give in a similar fashion. Giving to others has been fun for us and a blessing for our family.”

The Christensens are also longtime supporters of Brigham Young University. In 2009 the couple was invited by President Cecil O. Samuelson to serve on the President’s Leadership Council.

“Roy and Carol are kind and committed people,” says President Samuelson. “They have been generous to and supportive of BYU for many years. They have blessed students and the entire BYU community, and the university is deeply grateful for their service.”

Roy and Carol have been married for nearly 60 years; they have reared 11 children and hosted scores of retreats for grandchildren. Their story together began when the two met at BYU, where their acquaintance led to friendship and an engagement. “I thought he was pretty cute,” remembers Carol. 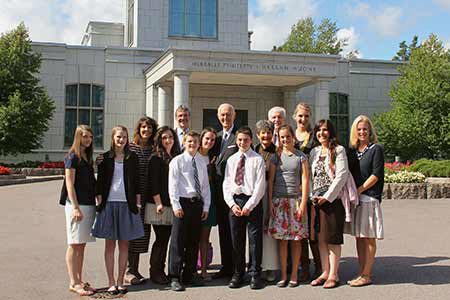 As a teenager Roy became a student of the gospel. “I was in awe of what I was learning.” Because missionary service was restricted during the Korean War, Roy didn’t think he’d be called. He was surprised when his bishop informed him of a one-missionary-per-ward exception and invited him to consider serving. Roy was called to Denmark, and he and Carol postponed their engagement.

When Roy returned home he and Carol (who had recently graduated from BYU and found work as a teacher) reunited and were married a month later.

“When I first met Carol, we talked about families, which cemented our relationship,” says Roy. “She is the love of my life, and between us there has never been a question about what we wanted. Our purpose in life is family - not money, not career - everything has to do with family.”

Through their example and in their quiet way they taught their children life’s most important lessons: family comes first; faith, hope, and trust in God are foundational; and happiness is found in reaching beyond yourself.

Their efforts to teach the importance of giving are well illustrated in one of their favorite Christmas memories. Carol relates: “One year we got a last-minute call inviting us to help a family on Christmas Eve. Of course, stores were already closed. We decided with our family that we would deliver our Christmas to this family. It is a hard thing for children to give up Christmas. But we decided to take everything. We celebrated Christmas with them as they excitedly opened the gifts. Being there actually made it easier for our children. They knew it was the right thing to do because they felt it. And the next day Roy brought home a puppy as our Christmas gift. We love that Christmas and still talk about it.”

Giving and steady living of the gospel have always been at the center of their family. “Sure, we’ve had to grapple with life’s difficulties, but the gospel provides direction and meaning,” says Roy. “It has been everything for us.”

As a returned missionary at BYU, Roy studied to be a teacher, but having grown up in a mining town, he decided that to see and understand more of the world he would instead become an accountant. After he and Carol wed, he passed the certified public accountant exam, and the family headed to California where Roy launched an accounting firm. Roy is an entrepreneur. In his work as an accountant, he saw and later capitalized on opportunities in the healthcare and small hospital industries.

Eventually, the Christensens moved back to Utah, where they lived for nine years before returning to California. While in Utah, in addition to the work Roy was doing, Jeffrey R. Holland, then dean of Religious Education at BYU, asked Roy to teach a religion class at the university, and later he was invited to teach an entrepreneurship class in the business school. Roy enjoyed both of these opportunities to be involved at BYU, and over the years he and Carol have remained connected to the university.

“In Whom I Have Trusted”

Today, the Christensens have chosen to lend their time and financial support to the BYU Museum of Art. With Roy’s knowledge of the Danish language and their love of art, the couple played a significant role in procuring artwork for and funding the museum’s 2010 record-setting exhibition, Carl H. Bloch: Touch of the Master’s Hand. Roy says the results of that exhibition were huge for BYU and for the many individuals who attended.

“When the museum said there was a possibility of a second show, we were eager to help,” says Roy. “This exhibition is going to be first-rate. The artwork that will be in the museum is tremendous.”

Carol says: “I love the painting Agony in the Garden by Schwartz. It comes from a church in Denmark and depicts the Savior being comforted in Gethsemane by an angel. The feelings it expresses and the colors and composition are amazing.”

Roy and Carol say they have both been blessed by their association with BYU. They are pleased to be able to give back and help others. “It’s so obvious to me what the gospel provides,” says Roy. “The fruits are real.”

Carol adds, “In today’s world I more and more appreciate the ‘iron rod’ of the gospel of Jesus Christ in my life. Without it we would be discouraged, but with it we have a way back to our Heavenly Father.”