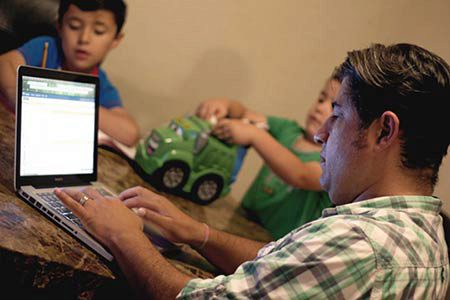 Pathway students like Lehi Santana study online at home. His study and homework set a good example for his two boys.

Playing lead guitar and jamming alongside Latin pop icon Paulina Rubio, Lehi Santana was living life large at age 26. He could hear the roar of the sold-out crowd of 25,000 in Monterrey, Mexico. His dreams had come true.

He continued his love of music as a teacher. Despite failed auditions and discouraging opinions from others, Lehi continued to be the lead singer and guitarist of his own band for the next 16 years. Most days found him playing contentedly with his prized Gibson Les Paul Standard in hand.

Now 42, Lehi is a first semester Pathway student. Armed with the same go-getter attitude and rock ‘n’ roll heart, he also has a new perspective and a new dream to conquer.

If you ask Lehi, he feels the Pathway opportunity was practically delivered to him on a silver platter. His curiosity was piqued after hearing a Pathway student bear her testimony of it. His brother, also his bishop at the time, filled him in on the program objectives and benefits.

After missing informative firesides, Lehi recalls that Pathway missionary Elder Rodriguez intervened. “The program came to me,” said Lehi. “Elder Rodriguez cared enough to call me on the phone. He didn’t even know me. He just knew my name.” 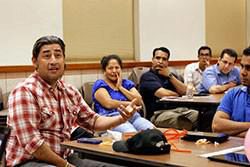 Lehi participates in a class discussion during the Thursday night “gathering” of Pathway in Monterrey, Mexico. In the one hour gathering, students review homework, prepare for tests, and teach each other.

The timing could not have been more perfect. Life had thrown a painful curveball when Lehi and his wife had separated last summer. Supporting himself and his two young sons was taking a huge toll, both emotionally and financially.

“I was looking for my miracle,” Lehi says. “I didn’t know how the program was going to help, but I felt there was something in it for me.”

Heading faithfully back to school made life considerably different for the family. Not only did Lehi have to practice self-discipline, but his two young boys had to get used to seeing their dad do homework. “It was funny and refreshing to hear my kids ask if I could play with them after I did my homework,” laughed Lehi. “That seemed backward!”

The same determination summoned years ago on stage is serving Lehi well now as he finishes the three-semester Pathway program. He plans to earn an online degree in web design or business management from BYU-Idaho. He is confident a degree from a school in the United States will open new doors.

The Pathway online forums, instructors and speaking partner programs leverage the spiritual and academic growth of students. Lehi uses Skype to communicate with a speaking partner each week, and as such he has gained a trusted confidant, friend and mentor. Besides the key points the two discuss, Lehi has appreciated getting input from another father on raising children and getting his sons on missions. 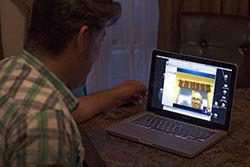 Lehi Skypes with a speaking partner from the United States 30 minutes each week. Volunteer speaking partners help Pathway students with English as a second language and to exchange cultural ideas.

Feeling his own testimony grow has only confirmed Lehi’s first inclinations that Pathway could be the miracle he needed. “Everything is focused on the gospel,” he said, “and everything goes straight to the source.”

The chance to learn and grow has been a gift during what Lehi considers the “darkest point of his life.” He calls Pathway the “light at the end of the tunnel.”

While he may not be onstage playing to adoring fans, Lehi has learned to focus on what is far more rewarding: his family and how his faith, gifts and experiences can touch his life and others.