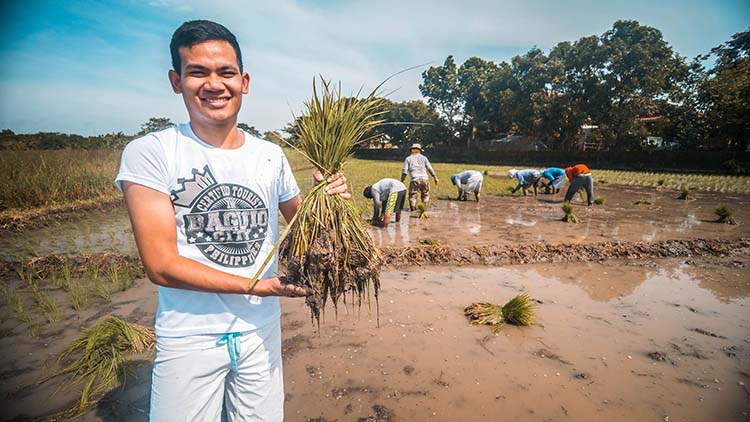 It might seem odd that farmers would have trouble feeding their own families, but it happens all too often in the Philippines. “Even though they are the ones growing the food, sometimes they don’t have enough food to eat,” says Elvin Laceda, a junior from the Philippines. “They have to sell most or all of their crops to pay off their loans. They don’t have a choice, because they are trapped in a cycle of debt.”

This issue is one that a team of student entrepreneurs at BYU–Hawaii is trying to solve with a project called RiceUp. And for them, it is not just a classroom exercise; it is a reality for people like Laceda, a member of the team who was raised in a poor farming community in the Philippines.

The problem is that Filipino farmers are squeezed between exploitive markets and loan sharks. Farmers’ only option is to sell their crops to middlemen, who take as much as 83 percent of the profits. With such narrow returns on their harvest, farmers are then forced to take out loans with inordinate interest rates that cut further into their income. This leaves rice farmers, for example, with an average income of $71 a month—a meager living at best.

Enter BYU–Hawaii and RiceUp. First, the students created a mobile app that enables farmers to market their crops directly to consumers. By skirting the middlemen, farmers are able to keep up to 90 percent of the profit on their harvest. Next, the students developed a curriculum and opened a school to teach farmers business skills, financial literacy, and principles of self-reliance. Farmers who have been using the app and applying their new business skills have reported an increased monthly income of as much as $500—seven times the $71 average.

The students are working to open more farming schools in the Philippines, and they are exploring the possibility of expanding RiceUp to other countries in Southeast Asia that face similar problems.

BYU–Hawaii’s student entrepreneurs form the university’s chapter of Enactus, an international organization that develops the next generation of entrepreneurial leaders and innovators by teaching students to apply business savvy to address social ills.

Each year Enactus hosts national and international competitions to showcase and support the best projects from around the world. In May 2018, BYU–Hawaii took home the national championship with RiceUp, and in October 2018 the RiceUp team competed in the Enactus World Cup and advanced to the semifinal round. 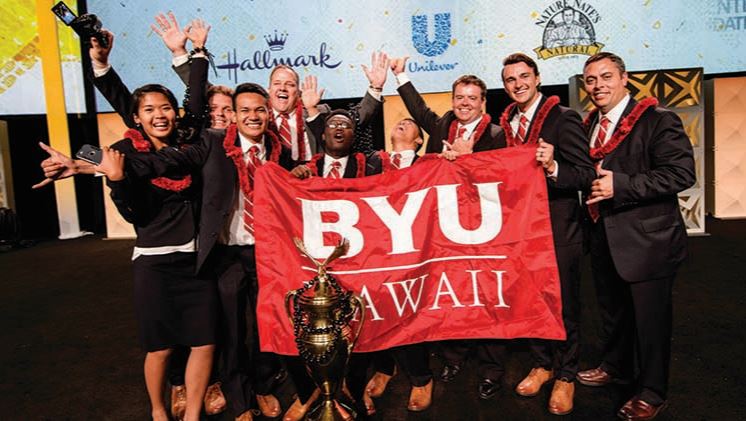 BYU–Hawaii’s Enactus team took first place at nationals and advanced to the semi-final round in international competition with their project to empower Filipino farmers.”

This isn’t the first time BYU–Hawaii has excelled in competition, and it probably won’t be the last. The university’s Willes Center for International Entrepreneurship has developed a strong Enactus program with a culture of both excellence and compassion. Students say the difference between BYU–Hawaii and other schools is that while other teams develop projects primarily for the competition, BYU–Hawaii’s team focuses on serving and giving back.

“The students are focused on helping others rather than receiving recognition,” says Jason Earl, director of the Willes Center and an Enactus faculty advisor. “They’re here for the right reason, and there’s a spirit of love and aloha.” Joseph Duano, another student member of the RiceUp team, explains, “We really think about what we’re doing for the farmers. It’s not about us doing well. It’s about conveying the right message: the farmers’ message, the message of Christ, the testimony we’re trying to bear.”

BYU–Hawaii’s Enactus program currently includes 61 students engaged in nine projects at different stages of development. Collectively they have devoted nearly 16,000 hours of service in 2018, all while attending classes full-time and, for many of them, working part-time to help fund their education. From that cadre of passionate and dedicated students will come many more projects like RiceUp that embody the mission of BYU–Hawaii as it was articulated by President David O. McKay: to produce students “whose influence will be felt for good toward the establishment of peace internationally.”