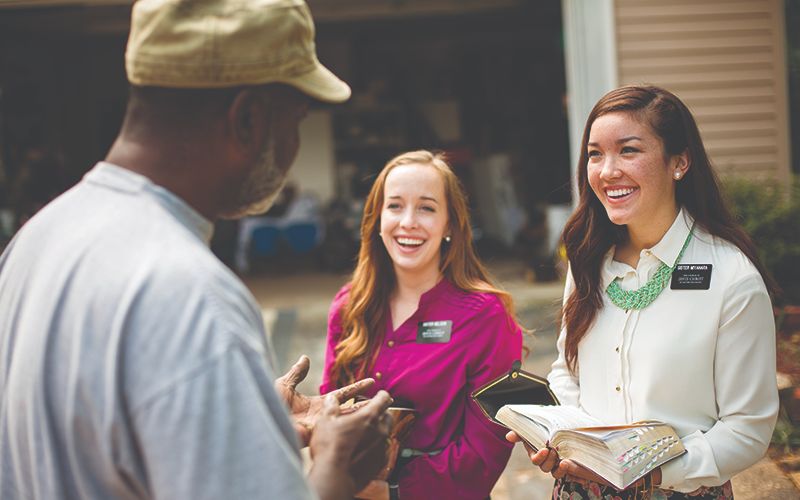 “Think of your brethren like unto yourselves, and be familiar with all and free with your substance, that they may be rich like unto you.” —Jacob 2:17

The butterfly effect is the idea that small things can have a far-reaching and incalculable impact on complex systems, such as a butterfly flapping its wings and causing a hurricane elsewhere in the world. Forms of this concept have appeared in science and literature for hundreds of years, and as a scientific model it has been debated and studied by well-educated mathematicians and theorists for decades. But thousands of years before scientists or authors took interest, ancient prophets taught a similar principle.

In the Book of Mormon, Alma taught his son Helaman the eternal import of keeping God’s commandments: “Behold I say unto you, that by small and simple things are great things brought to pass; and small means in many instances doth confound the wise. And the Lord God doth work by means to bring about his great and eternal purposes; and by very small means the Lord doth con-found the wise and bringeth about the salvation of many souls” (Alma 37:6–7). In Helaman’s case, he was to keep his father’s records and pass them down to future generations.

This passing of the gospel record continues through missionaries and those who help sustain them in their labors. It continues when someone helps a missionary spread the gospel’s light throughout the world. Amulek is another who understood his sacred role when he heard Alma’s simple plea: “Will ye give to an humble servant of God something to eat?” (Alma 8:19). When Amulek responded to the spiritual prompting to shelter and feed a tired missionary, it was more than an act of charity. It was an act of faith and consecration. It was a personal testament to the divine origin of Alma’s call.

Likewise, when we help missionaries serve by giving them a small portion of our temporal substance and our spiritual support, we exercise our faith in a small and simple way to share eternal truth. We help fulfill the Lord’s sacred charge to “go ye into all the world, and preach the gospel to every creature” (Mark 16:15). In a spiritual manifestation of the butterfly effect, our simple acts of generosity to young men and young women who seek to bring others unto Christ cause ripples that expand ever outward to influence every person—and all succeeding generations—touched by a missionary’s service, from now into eternity.

Elder Juan A. Uceda of the Seventy was introduced to The Church of Jesus Christ of Latter-day Saints as a teenager in Lima, Peru. The missionaries taught him and his family, and he immediately recognized the truth of their message. Juan had a deep desire to serve a mission and worked hard for a few years to save enough money. However, even after all his dedicated work and some additional help from his family, he was still short of the funds he needed. In time, his bishop called Juan to his office and informed him that the Church would cover the outstanding costs of his mission. Elder Uceda recalls, “I was so grateful the Church would help me. Otherwise it would have been almost impossible to go and serve. Going on a mission was an intense crash-course training that helped me to really understand the gospel. As I was teaching, I was learning; as I was helping others see the Spirit in their lives, I was being converted to the gospel myself.” 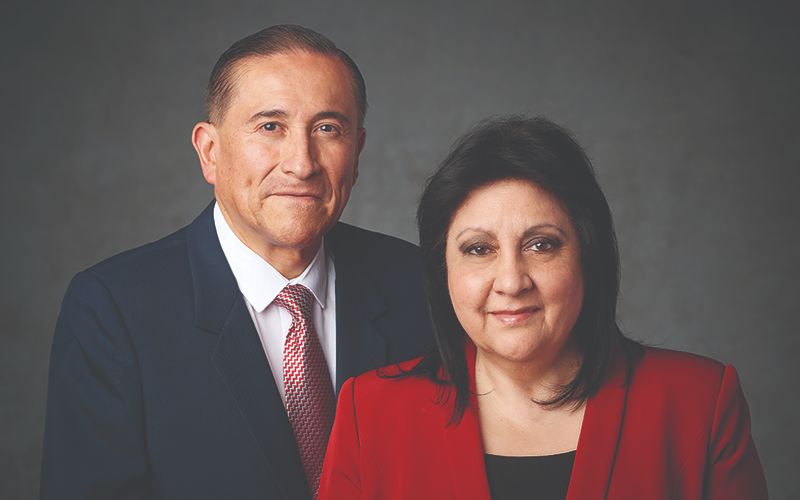 “Because of our missions, we knew the only way to begin a marriage is to start in the temple—and we did it.” —Elder Uceda

Elder Uceda’s experience receiving missionary support from the Church is not unique. More than 35 percent of all missionaries serving throughout the world need assistance from the General Missionary Fund. Those sacred funds bless elders and sisters by subsidizing rent, food, basic clothing needs, and mission travel. Think of how much better prepared these young missionaries are to teach about and represent the Lord Jesus Christ because there are sufficient resources for their basic needs.

Philanthropies supports missionaries through the General Missionary Fund, and through humanitarian and family history efforts it also serves millions of others around the world. Our missionaries benefit from the General Missionary Fund, and families and children around the world are blessed by life-changing access to clean water, maternal and newborn care, and food initiatives. It is difficult to quantify the force for good that these funds create. We frequently do not know the immediate or long-lasting effects of these programs, but some-times we are lucky enough to glimpse something or someone who has been influenced by our metaphoric butterfly and has been moved forward by its ensuing ripple.

Elder Uceda returned home after his devoted missionary service and resumed his friendship with Maria Isabel, another recently returned missionary who also had converted to the Church as a teenager. They decided to marry, and they set their sights on a temple sealing. At the time, the first temple in South America was under construction in São Paulo, Brazil. It was scheduled for dedication in the fall of 1978, and Juan and Maria Isabel were determined to be married there shortly after the dedication. That time came and went. They had patiently and earnestly saved their money, but they did not have enough. Finally, many months later, they reached their goal and embarked on the 4,400-kilometer journey from Lima to São Paulo. After a long and exhausting seven days, they arrived at their destination.

Elder Uceda described turning a street corner and at last seeing the temple with his own eyes: “I just wanted to get to the temple and place my hands on the walls so I could see that it wasn’t a dream but that it was real. We had made it.” Elder Uceda further explained, “Because of our missions, we knew the only way to begin a marriage is to start in the temple—and we did it.” 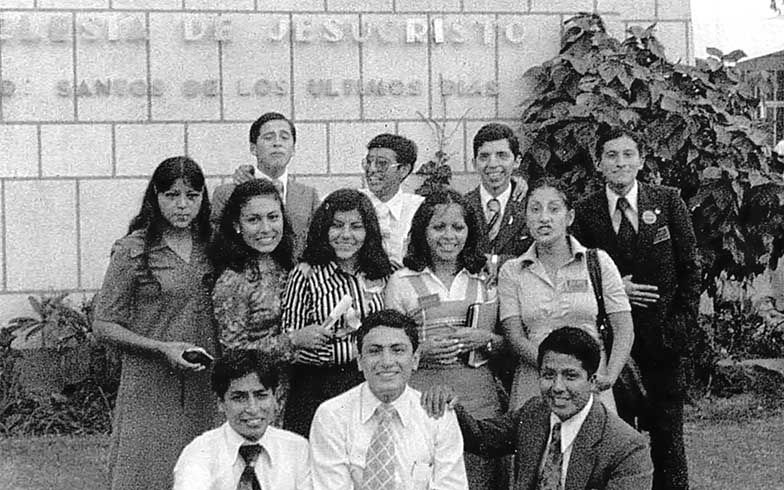 Elder Juan A. Uceda of the Seventy was introduced to The Church of Jesus Christ of Latter-day Saints as a teenager in Lima, Peru. The missionaries taught him and his family, and he immediately recognized the truth of their message. Generous donations allowed Elder Uceda (top row, fourth to the right) to fulfill his desire to serve a mission.

Reflect for a moment on the enormous influence that Elder Uceda’s mission had on the rest of his life. Consider its far-reaching impact on so many others. Elder Uceda learned the truths of the gospel for himself as he taught them to others, and he gained a strong testimony of how to lay a solid foundation for a covenant marriage. He and Sister Uceda have returned to those foundational truths time and time again as they have followed the Lord and spent their lives in His service.

It has now been almost 10 years since Elder Uceda was sustained as a General Authority Seventy. He and Sister Uceda have taught by word and example throughout the world. Lifted by the generosity of individuals who were in a position to help and who understood the Lord’s commission to give, Elder Uceda sacrificed two years of consecrated service to the Lord and others, which in turn blessed his life and prepared him to bless the lives of millions more. Small and simple things can indeed lead to great effects. Our own efforts may feel as small as the flapping of butterfly wings, but the effects of faithful action can be profound. May all of you who engage in the support of this wonderful work feel blessed by the service that it enables others to give, and may you continue to add your faith to the eternal and widening wave of this great latter-day cause. 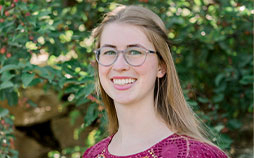 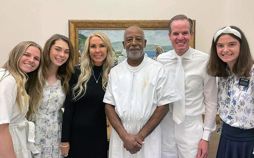 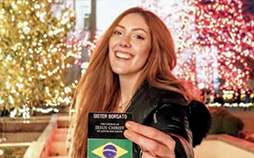 Sharing the Never-Ending Fountain of Happiness

She couldn't wait to serve a mission so others could expereince the happiness the gospel brought her.