Heavenly Father Knows Where You Are 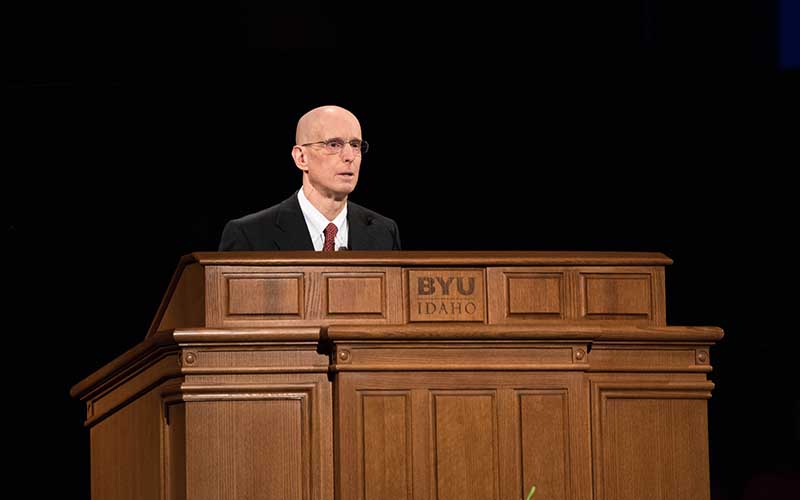 By President Henry J. Eyring, from a commencement address given July 22, 2020

Like you, I participated in a late-summer university graduation ceremony, 35 years ago. The winter semester leading up to that summer graduation was a time of disappointment and frustration for me, as I failed to earn admission to either of the two MBA programs I had dreamed of attending since boyhood. One of them was Harvard, where my father had been a student. The other was Stanford, where he had been a professor; I had often visited his office there and dreamed of someday having one just like his.

During that cold winter of my senior year of college, I battled bitter feelings. I had been a diligent student and a hard-working missionary. I expected that heaven would reward me. But it seemed that my long-held dreams were being unfairly dashed.

My guess is that you’ve faced similar disappointments. In fact, you may be feeling that way now. You have sacrificed to pursue the path to higher education. But the current tumult in the world might cause you to wonder if you have been traveling a mistaken path.

That is not the case. You are not lost to our Heavenly Father. His righteous servants are known, and He takes them down paths divinely laid out for them.

I saw that truth unfold on a day when I was taking a large group of returning missionaries to Japan’s Narita International Airport, with just enough time to make their departing airplanes. We were hurtling along the freeway when a phone call came from the Asia North Area Office in Tokyo. A staff officer there asked if we had a Brazilian elder by the name of Rodrigues with us. I replied, “Yes, he is.”

To my surprise and great disappointment, the staff officer declared, “Elder Rodrigues cannot get on his scheduled flight. You should turn around and take him back to the mission home.” I learned that a just-declared trade dispute between Brazil and the United States, where Elder Rodrigues was scheduled to catch a connecting flight home, would strand him in the States until the trade dispute ended. For all we knew, that could take months, or more.

I am ashamed to say that my personality changed instantaneously. As a young business consultant, I had spent more than a decade flying very frequently. I was used to never taking a “no” answer when it came to making my flight.

During the ensuing hour on the freeway, I made one phone call after another, with my voice steadily rising. The direct flights to Brazil were full. And making a connection in Europe wouldn’t work because Brazil’s trade dispute extended to the European Union as well.

By that time, we had arrived at the airport. Rather than parking, I drove to the terminal and stopped to let Elder Rodrigues out. Putting the Japanese equivalent of $200 in his hand, I declared, “You do whatever you have to do to get on your plane.” (It was not my finest hour.)

As Elder Rodrigues jumped out of the van and picked up his suitcase, he said something that pierced my heart: “It’s all right, President Eyring. Heavenly Father knows where I am.”

It would have been humbling enough to receive that unintended rebuke if Elder Rodrigues and I had been alone. But receiving it in front of a van full of other missionaries was not only humbling but embarrassing. Those words, “Heavenly Father knows where I am,” will haunt me forever.

Since then, I have tried to remain faithful and optimistic, especially when hope seems to be dashed by events beyond my control. Sometimes, though, that is hard to do. This current period of pandemic is one of those times. Particularly for you of the class of 2020, it is tempting to feel as though the timing of your departure from BYU-Idaho into the wider world is unfavorable and even unfair.

Dear graduates, I am not your mission president. But as your university president, I remind you of the blessings that attended Adam and Eve as they departed the Garden of Eden, as well as the blessings bestowed on Moses and the children of Israel as they left Egypt. Bear in mind and take to heart this promise: “Behold, I send an Angel before thee, to keep thee in the way, and to bring thee into the place which I have prepared” (Exodus 23:20).

Graduates, as you rely on our Savior’s sustaining comfort and the direction of the Holy Ghost, you will come to your promised land. The way has been prepared. It will not be easy, but you will look back upon your struggles with appreciation and satisfaction.

In closing, let me share with you two lines from the evening journal entry I made after returning from the Tokyo airport, with two vans full of new missionaries:

In the end, [Elder Rodrigues’] faith proved well founded: [he] booked on a flight directly from Tokyo to São Paolo, obviating the U.S. visa issue, at no additional cost. I was glad for the experience, though, of being taught faith by a humble missionary.

Heavenly Father knows where you are and where you are going. As you keep your gospel covenants, what now may seem to be a disappointing departure from the university can become a spiritual milestone. You can qualify for the blessing promised by the Lord to the missionaries of the restored Church of Jesus Christ: “I will go before your face. I will be on your right hand and on your left, and my Spirit shall be in your hearts, and mine angels round about you, to bear you up” (D&C 84:88).