For Time and All Eternity 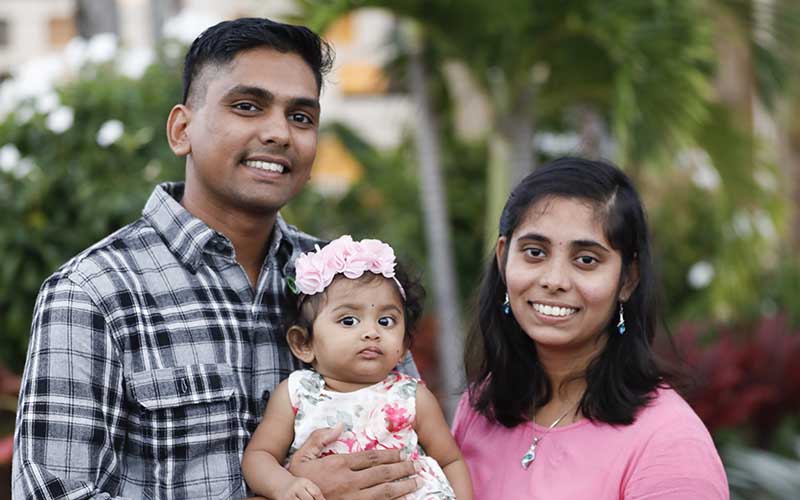 Balu and Ananya Pilli are one of the first couples from India to attend BYU–Hawaii through the IWORK program, but for Balu it was not an easy road getting there.

Balu joined The Church of Jesus Christ of Latter-day Saints against the wishes of his Hindu parents. “I kept nice clothes in my sports bag and went to church while my parents thought I was playing cricket,” Balu recalls. “I investigated the Church like that for years and got baptized on my 18th birthday without telling my parents.”

When Balu’s parents found out about his conversion, they ostracized Balu. Without the $8 he needed to pay his education fees, Balu dropped out of school and struggled with unemployment, food insecurity, and occasional homelessness.

In spite of hardships, Balu stayed true to his faith and served a full-time mission. Some of his best experiences were receiving his patriarchal blessing and temple endowment. “They gave me hope,” he says. “I was promised that I would be blessed with a good education as long as I followed God’s path.”

After returning home from his mission, Balu married Ananya, but they couldn’t be sealed because they didn’t have the money to travel to the nearest temple, in Hong Kong. Later an admissions officer from BYU–Hawaii visited their area, which ultimately led to Balu being admitted to BYU–Hawaii through the IWORK program.

One of the first things that Balu and Ananya did after arriving in Hawaii was go to the Laie Hawaii Temple to be sealed for time and all eternity. Then about a year later their first child was born in the covenant. “After many struggles and coming to BYU–Hawaii, I feel that all my promised blessings are being fulfilled,” Balu says. “Being sealed in the temple was the most beautiful and memorable day of our lives.”

Being new parents while going to school full-time and working part-time has been challenging for Balu and Ananya, but they are grateful for the opportunity to be at BYU–Hawaii and for the donors who make it possible. “We feel so blessed,” Balu says. “This all happened because of IWORK. Without it my life would be incomplete.”

After Balu graduates, he and Ananya plan to return to India and help others find their way to BYU–Hawaii “so they can be blessed with great blessings,” he says. Thank you for helping Balu—and others who will come after him—receive these great blessings from BYU–Hawaii and the Laie Hawaii Temple.