John Ricks entered Ricks College in 1963. More than a century before, in 1848, Thomas E. Ricks was about John’s same age and on his way to the Salt Lake Valley when he and his family had a run-in with Native Americans. Thomas was shot three times and then left for dead before his companions returned to recover his body and saved his life. 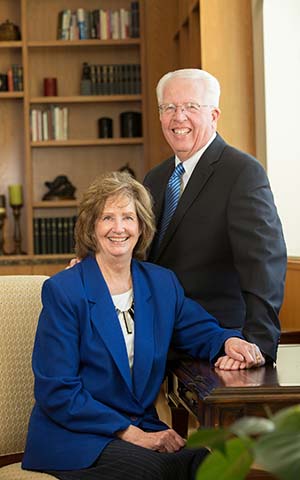 “He later helped lead five different wagon trains west to the Salt Lake Valley,” John says, recounting his great-grandfather’s pioneer exploits. “He worked on the railroads in Cache Valley before he was asked by the First Presidency to settle the Rexburg area. He became the first stake president in that area.”

In the late 1880s, the U.S. government passed the Edmunds-Tucker Act, bringing community schools under government ownership. The Church responded by creating 36 academies—one in almost every stake in the Church at the time—including one in southeast Idaho. But just one year after it opened, Ricks Academy had a financial crisis that nearly resulted in its closure.

“They had a board meeting where they discussed closing the school,” John recounts. “And Thomas stood up and said, ‘I’ve been through many hard times in my life, but there’s not one I couldn’t get out of. Let’s find a way to finance this school to keep it open.’”

That year, Principal Jacob Spori worked on the railroad and donated his income—$177—to keep the school open.

Seventy-five years later, after growing up on a farm about 25 miles away, John entered the school named for his progenitor—Ricks College. “I had a lot of one-on-one time with my professors, and I got to know them really well,” he says. “I came back to Ricks after my mission and completed my associate degree before going to BYU, where I met my wife, Peggy.”

John’s career started out in life insurance before he entered financial planning. As the years passed, one by one, every one of their six children attended Ricks College. The Ricks family watched as their beloved school grew and transformed into the four-year BYU-Idaho. And all of their children said that if it had been a four-year school when they attended, they’d have stayed.

“We always felt we had a very good education there,” John says. “Now some of our grandchildren are going there.”

By the time John retired in 2007, he’d helped many of his clients work with the Church’s Philanthropies Department to create planned gifts. Thinking about how his ancestor had given so much for the school, John and Peggy decided it was time to create a planned gift of their own—thus qualifying him and Peggy to be members of the BYU-Idaho Legacy Society. Later, President Kim B. Clark nominated the Rickses to become the Legacy Society’s first chairs.

“What a blessing it is to have a university like BYU-Idaho that accepts students of average grades and abilities and educates them so they can support their future families,” John says.

“My wife and I really appreciate BYU-Idaho’s mission to educate, and we’re willing to do what we can to help people become more involved at BYU-Idaho.”

Of course, you don’t have to be a descendent of Thomas E. Ricks to make a difference at BYU-Idaho. If you’ve included BYU-Idaho in your estate planning—in a will or trust or in a beneficiary designation in an insurance policy or retirement account—John and Peggy encourage you to get in touch with the Philanthropies Department and become members of the Legacy Society. There are no costs, there is no minimum gift, and each year you’ll be invited to attend the Legacy Society luncheon.