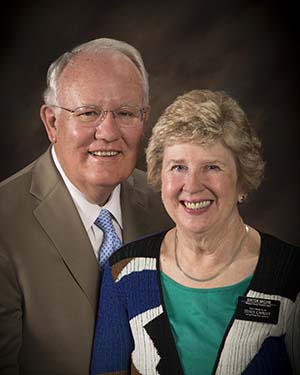 Donors Kent and Barbara Michie aim to empower the next generation through generosity.

Neither Kent nor Barbara Michie attended BYU-Idaho or Ricks College. But they now regularly donate to BYU-Idaho, and the university is even part of their estate planning. It all goes back to a motto Kent picked up—something that has become a pattern for their lives: First you learn, then you earn, and then you return.

“The ’return’ in ‘learn, earn, and return’ doesn’t mean you die and go to heaven,” Kent says. “It means you return some of your prosperity and you give some of the excess back to the people who provided your education.”

Kent and Barbara met in a Sunday School class in the Salt Lake Valley after they’d both graduated from college. Barbara had come to Brigham Young University in Provo, nearly 2,200 miles from her hometown in New York, despite not being a member of The Church of Jesus Christ of Latter-day Saints at the time. She joined the Church, and for her and Kent, their educational experiences were life changing.

Kent worked in investing and served in the military. Then he moved on to public finance before being appointed as Utah’s commissioner of insurance in Governor Jon Huntsman’s cabinet. Meanwhile, Barbara worked as a teacher and as the mother to their four children.

“When we retired, Barbara and I went on our mission to Finland, where I’d served when I was younger,” Kent says. “When we got back from Helsinki, we were almost immediately asked to serve a Church service mission for BYU-Idaho.”

The Michies’ assignment? To find internships for BYU-Idaho students in Salt Lake City. In that role, they interacted with dozens of students as they pursued their professional and academic goals. They quickly realized how BYU-Idaho was blessing and preparing students from around the world.

“One of the greatest couples we met was from Bangalore, India,” Kent recalls. “They were both born into the lowest caste. They came to BYU-Idaho and both graduated in accounting.

They’ve had so many curveballs thrown at them throughout their lives, and these wonderful Church members need these opportunities to be empowered.”

As their BYU-Idaho mission came to a close, the Michies knew they wanted to make a difference for the sort of students they’d worked with.

When they looked at their estate, they realized they had an opportunity to make a lasting difference, so they joined the BYU-Idaho Legacy Society and established a deferred gift to the university.

“I’m not this great big philanthropist,” Kent says. “But I’ve been greatly blessed in my life with good careers that were given to me because I was empowered by education. Giving is a form of gratitude, but it’s also a form of valuing life.”

The Michies know BYU-Idaho is a place where their donation can make a significant difference - not just in the immediate future but for generations to come. If you too subscribe to a philosophy of “learn, earn, and return,” you can establish a deferred gift and join the BYU-Idaho Legacy Society. Simply contact David Smith at the Philanthropies Department via email or telephone 801-356-5251.

“We believe in the Church and in its educational programs,” Kent says. “They’re good programs, and they are worthy of our support. They help empower the young people of the Church so they can go forward and do the same thing for others.”