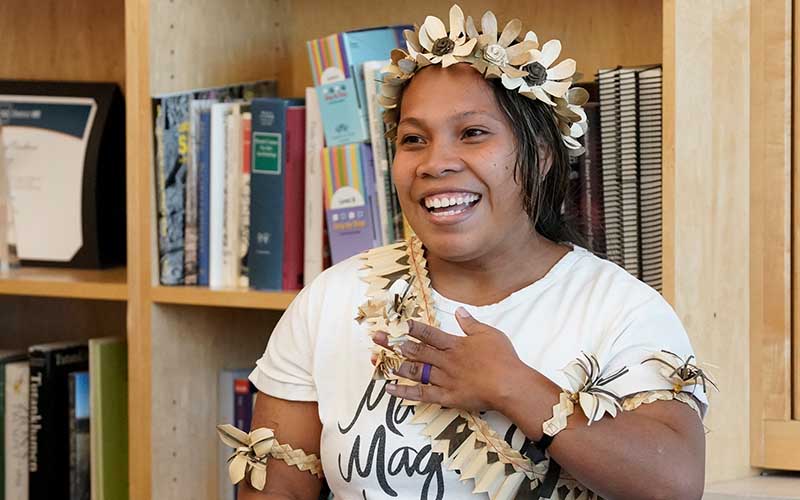 When Tereua Kainitoka, a BYU–Hawaii alum from Kiribati, was asked to teach a Kiribati language class at BYU in Provo, her initial thoughts were, “Me? A college professor? Do I really want to teach?” But after praying about BYU’s invitation, she came to realize that God had prepared this different path for her.

Acting on faith, Tereua uprooted her husband and two children from Hawaii and moved to Utah to teach the world’s first university course on the Kiribati language. The distinction of being the first in the field is not as important to Tereua as what she now believes to be her calling: to help preserve her native language and culture.

A Passion for Language Preservation

Although she was hesitant at first to become a professor, Tereua has since developed a passion for teaching her language. For her it’s not just an academic exercise—it’s personal.

Tereua’s family traces its lineage back to a group of people from Banaba Island who were ethnically distinct from I-Kiribati. Over time, through foreign imperialism and forced relocation, the Banabans were assimilated into Kiribati and Fiji, and the language that was spoken by Tereua’s ancestors has been forgotten.

Today, I-Kiribati speak a mixture of Kiribati and English. “We still use our language but not to its full potential,” explains Tereua, “and I want to document it.” The islands of Kiribati also face environmental threats that one day may force a mass migration to Fiji, which would place an existential strain on the Kiribati language and way of life. In the face of these challenges, Tereua says, “I do not want what happened to the Banabans to happen to I-Kiribati. I want to help preserve the language.”

To guide her on her new career path, Tereua has sought the mentorship of one of her BYU-Hawaii professors, Phillip McArthur. As an anthropologist and folklorist specializing in Micronesia (which includes Kiribati), Dr. McArthur has spent much of his career studying Marshallese narratives, folklore, songs, and performances. “[Professor McArthur] has been a great friend to us, not just as a teacher,” Tereua says. “I’m staying in touch with him because he’s done a lot with the Marshall Islands, and he can guide me in my work.”

Tereua’s language courses offer an unprecedented step in teaching and preserving the Kiribati culture. And her efforts are not going unnoticed in her homeland. In fall 2019, Beretitenti (President) Taneti Maamau of Kiribati visited BYU and met with Tereua and her students. After the class performed native songs, dances, and storytelling, Beretitenti Maamau praised Tereua and her students, saying that he is grateful for their efforts in preserving his people’s language.

Eventually Tereua hopes to return home and continue her work on language preservation in partnership with the Kiribati government. For now she is serving as an unofficial cultural ambassador. But living in a foreign land isn’t stopping her from directly helping people back home. For one of her class assignments, she had her students write and illustrate children’s books in the Kiribati language—a scarcity on the islands, where most books are in English—and she plans to publish her students’ books and send them to schools in Kiribati. 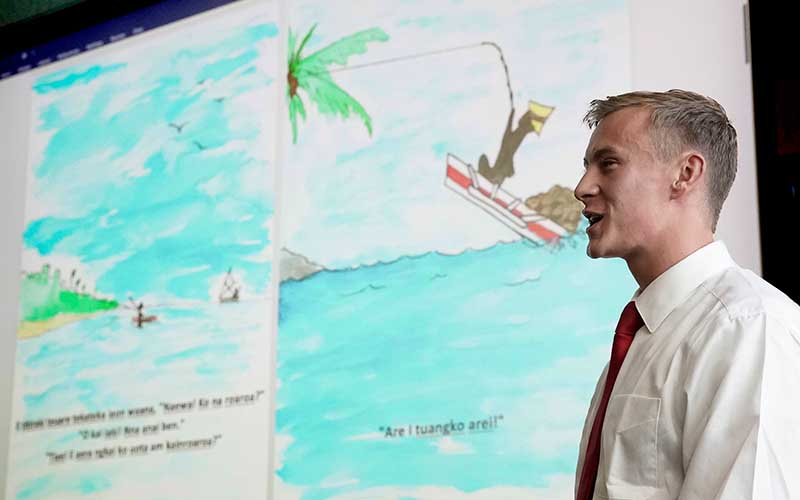 Tereua plans to publish and send home children’s books written by her students in the Kiribati language. Most books on the islands are in English.

Neither language study nor teaching was part of Tereua’s career plans. She studied peacebuilding at BYU–Hawaii, and her dream was to become an ambassador or to work in the United Nations. After graduating in 2015, Tereua went to Utah for an internship with the More Good Foundation. While in Utah she married James Oliphant, a Utah native she met at BYU–Hawaii.

The following year, Tereua, James, and their first child returned to Hawaii so James could finish his degree. In fall 2018, James applied for an internship in Kiribati. Now with two children, the family was excited about moving to Kiribati and was making all the necessary arrangements. Then “everything just stopped,” says Tereua. “We didn’t hear anything back from Kiribati.” That’s when Tereua heard from a good friend who served a mission in Kiribati and also graduated from BYU–Hawaii that the BYU Center for Language Studies was looking for someone to teach a course on the Kiribati language.

“It was a hard decision because we were focused on returning to Kiribati,” says Tereua. She and James were both eager to live in the islands and unsure about moving to Utah. “My husband and I definitely prayed about it a lot. When I got the job, I thought, ‘Okay, I guess we’re not going to Kiribati after all. We’re going to Utah instead.’”

Tereua’s move from the islands to the Intermountain West was unexpected, but what makes her sojourn in Utah even more unlikely is that she grew up the daughter of a minister in the Methodist Church.

Tereua was introduced to The Church of Jesus Christ of Latter-day Saints at the age of 18 when her Protestant friend was converted and baptized to the Church. Tereua, who thought her friend had made a terrible mistake, determined to steer her friend back to the Protestant faith—but it ended up turning out the other way around.

Tereua was living with her friend’s family at the time to be closer to her high school, and her host family began inviting missionaries from the Church over to visit. The first thing that intrigued Tereua about the Church was that the missionaries were young, unpaid, and temporary volunteers, unlike her father’s Methodist ministry. “I was interested to learn, but it wasn’t very fun at first because it was just me Bible-bashing with them,” says Tereua. “They told me they had never met anyone as stubborn as me.”

After six months of study and prayer, Tereua embraced the restored gospel of Jesus Christ. “I knew that I had felt the Spirit of God,” she explains. “I knew the Book of Mormon was true. And I knew that I had to be baptized. It didn’t feel like I was leaving my religion—just adding more to what my family had already given me.”

Despite the strength of her new faith, Tereua’s road forward was not easy. “My mom was so mad,” says Tereua. “She told me: ‘You are never going to join another church, not while my eyes are still open. If you do this, you are going to be disowned.’” Later on, after Tereua applied to BYU–Hawaii, her mother said, “If you go to BYU–Hawaii, don’t think about coming back. I will curse you.” In a culture that puts a high premium on filial piety, Tereua had to gather a great deal of courage to be baptized in the face of her mother’s opposition.

Tereua’s father was living in Fiji while all this was happening, and he traveled to Kiribati when he heard about his daughter’s conversion. When Tereua sat down with her father, she was nervous to share the Book of Mormon right away, so she gave him a copy of True to the Faith and invited him to read it to understand her beliefs. “After I talked to him, I felt like he gave me his blessing,” says Tereua. “He told me: ‘If this is where your opportunity awaits, I’m not going to hold you back from it. So go, if you need to go to this school.’ That was one of my greatest blessings—that he was okay with me going to BYU–Hawaii.” 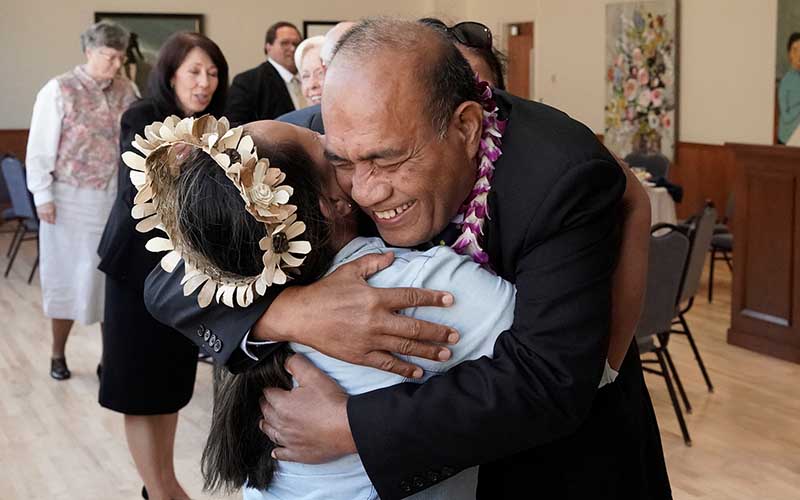 Parental permission was not the only obstacle that Tereua had to overcome to attend BYU–Hawaii. There were also financial challenges.

“I come from a background where we hardly have the means to afford higher education,” says Tereua. “We rely heavily on scholarships, but those are limited. When I got accepted to BYU–Hawaii, my first thought was ‘How am I going to afford this?’”

Fortunately for Tereua, she was also accepted into BYU–Hawaii’s donor-funded IWORK program, which provides full-tuition, room, and board for international students who work part-time while they are in school. However, the IWORK program requires students or their families to make an out-of-pocket contribution toward their education. Even that modest amount was out of reach for Tereua; although her parents allowed her to attend BYU–Hawaii, they were not willing to help financially.

Not knowing how she could afford to go, Tereua did not accept her admission to BYU–Hawaii right away. It took intervention from a senior missionary couple serving in Kiribati to help Tereua find a way.

The senior missionaries found Tereua on a list of pending students and reached out to see if they could help. She recalls, “They came to the school I was going to and said, ‘Hey, you need to go to BYU–Hawaii. Let’s figure out what’s holding you back.’” After learning that Tereua could not afford the personal IWORK contribution, the senior missionaries worked with Church employees in New Zealand to find funding that could be used to assist Tereua.

“I wouldn’t have been able to go to college without IWORK, and I definitely wouldn’t be where I am today if it wasn’t for the program,” says Tereua. “Education is a great opportunity for people like me and for others who cannot afford college but are blessed with scholarships. Education needs all the support there is to encourage it wherever possible.”

Tereua’s time at BYU has been a great blessing for her. The faculty have been supportive, and Tereua has made friends who are doing work that is similar to what she is interested in doing. She is even considering applying to graduate school in second-language teaching.

Ultimately, Tereua plans to return to Kiribati to continue her work in language preservation. She hopes to leverage her experience with the president of Kiribati to work something out with the government, such as developing a full-immersion language curriculum for Kiribati schools.

“It’s just one blessing after another,” says Tereua, “blessings that you don’t expect at all." I like to tell people that I feel that, for my entire life, Heavenly Father has been laughing at me for all the plans I’ve made for myself. I have all these plans written out, and all of a sudden He’s like, ‘Ha ha, just wait until I give you this. You can stress as much as you want, but wait until you see what’s waiting for you here.’”