With Your Help, He Found His Way 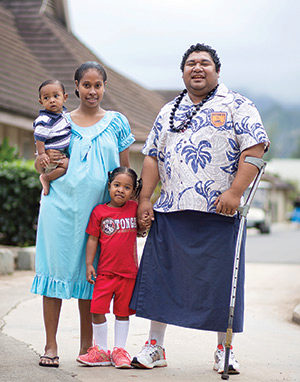 Sebastian Alewa joined The Church of Jesus Christ of Latter-day Saints in Papua New Guinea on January 26, 2001. He started a new journey that day - one that led him to BYU-Hawaii and will eventually take him back home. “BYU-Hawaii has totally changed me,” he says. “I’ve had opportunities to learn to be a leader, and I’m preparing to go home to help my community.”

Sebastian lost his right leg in an outboard motor accident a few years before he joined the Church. He has walked on a prosthetic leg for 17 years, but his disability has not held him back. He is a man of action and faith.

Not long after Sebastian’s baptism, a leader invited him to attend the Church’s Liahona High School in Tonga. Friends Sebastian made there are still friends today. After graduation from Liahona, he was called to serve in the Papua New Guinea Port Moresby Mission.

The Family Is Ordained of God

He returned home encouraged by his mission president to find an eternal companion. He found Edna, but she didn’t take him seriously because she was still in high school. He then moved so he could be in the same ward as her. Then he convinced his elders’ quorum to sponsor a dating activity, but Edna didn’t come.

After Edna graduated from high school, she began dating Sebastian, and soon the two were married. Supporting of Edna fuels Sebastian’s desire to succeed. “She helps me, and I help her. We help each other,” he says. When their daughter Mayarr was born, Sebastian knew he needed an education to better provide for his growing family.

“My former mission president saw me with Edna and Mayarr. He invited me to his office and asked if I wanted to go to BYU-Hawaii,” says Sebastian. “I said I didn’t know if I could because of finances and all. The mission president said there was a way.” Sebastian and Edna talked it through, he applied and was accepted, and that’s when they learned about the university’s student-aid program for international students. IWORK made their BYU-Hawaii experience possible.

Sebastian is studying Pacific island studies with an emphasis in public management. He wants to work for the government in Papua New Guinea. It is a diverse country where the number of distinct dialects exceeds 800, and Sebastian says lessons from his multicultural BYU-Hawaii experience will have many applications at home.

As an IWORK student, Sebastian is working as a security officer at the Polynesian Cultural Center, which has given him the chance to interact with people from all over the world.

Edna and Sebastian’s son, Vau, was born last January, and the couple is expecting their third child just before Sebastian graduates. The Alewas are grateful for IWORK and those who made it possible for them to come here. “IWORK is a blessing for students like me,” says Sebastian. “It gave me the opportunity to come to school with my family. In my language the words are taniku kamu kamu. It means ‘thank you very much.’”